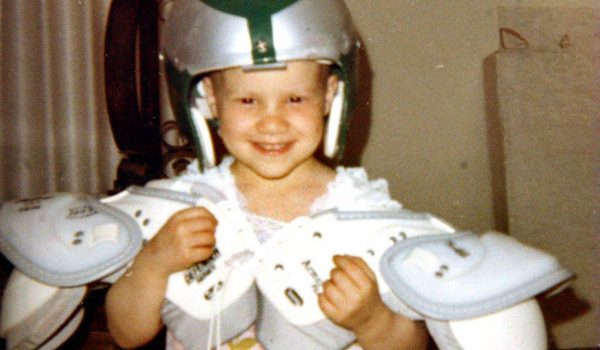 Inspired by then 3-year-old Kim Hill, the charity co-founded by her dad Eagles tight end Fred Hill and Stan Lane has had a remarkable impact. In Lane’s words: “When Kim Hill contracted leukemia in the early 1970s a child had a 10 percent chance of survival, and today we can cure a child.”

It was only 47 years years ago, but in terms of sports 1972 was light years in the rear-view:

Things have improved considerably for our Big Four, including a Super Bowl championship for the Birds.

Back in 1972, medical research to combat cancer and leukemia was also in the Dark Ages, whereas today advances in drugs and oncology in general have been able to extend victims’ lives and improve their quality of life. Which is where Stan Lane and just retired Eagles tight end Fred Hill came in.

Next-door neighbors in Cherry Hill, the two bonded over golf and the Birds.

When Hill mentioned that his 3-year-old daughter Kim (above) had been diagnosed with leukemia, they became especially close.

“Fred asked owner Len Tose to supply a player or two for the fur fashion show the Eagles wives were putting on to raise money for Leukemia Society of America,” Lane remembers as if it were yesterday in a Center City Starbucks one busy day last winter.

“Leonard came too and he wrote the checks for the balls that were given away as prizes — 40 bucks a piece! The fashion show raised $9,000 and Leonard presented us the check and said, ‘I’m ready to commit the team for you.’

Tose asked Lane, a South Jersey insurance exec, to come up with a business plan including an “ask” of him and the Eagles.

“I said, ‘Leonard, There are two asks:

Isolation precautions create barriers between people and germs. These types of precautions purifies the room and prevents the child from getting an infection.

“Leonard never flinched on either number.”

“I showed up at this fancy office on Park Avenue and asked to see the head of the Leukemia Society of America,” Lane says. “And they asked if I had an appointment. No, but I have a check for $9,000.”

“That’s when I decided to start Eagles Fly for Leukemia, with all the proceeds staying in the Philly area and virtually nothing going to overhead.”

For some context, in 1972 Special Olympics — which today is one of the world’s great sports and sports-related programs that depends primarily on charitable giving and corporate sponsorships — was only four years old. “Fred and I met with Dr. Audrey Evans and I copied down her wish list which included a 12-bed ward, a research lab and life isolation room and a house where kids could stay with their parents.

Tose called in his right-hand man, Jim Murray, a former sports information director at Villanova who was a marketing whiz and would become the Birds’ general manager:

“In those days the fans weren’t required to buy pre-season game tickets and the Eagles had to get sponsors to pay for those games,” Lane says.

“McDonald’s was a sponsor of the Pittsburgh Steelers game. A hurricane hit Philly and the pre-season game was canceled but McDonald’s had to pay for the game anyway.

“In 1974 Dr. Evans approached us and told us she found a house 4144 Spruce Street. The ad agency that represented McDonald’s asked for a favor since they got stuck with the pre-season game. They asked quarterback Roman Gabriel to do a free commercial promoting a new green milkshake the ‘Shamrock Shake.’

“Eagles Fly for Leukemia asked for 25 cents a shake to help us buy the house. Their response was, “We will pay for the whole house if you let us name it after our new mascot, Ronald McDonald.

“And at the opening, Ray Kroc came into Philly,” Lane says proudly, referring to the McDonald’s founder.

“The Shamrock Shake and the whole McDonald’s connection was Jim Murray’s brainstorm.”

Tose was so impressed that he called George Halas, owner of the Chicago Bears, and Bud Adams of the Houston Oilers and got them to sign on in their towns.

And the rest is history. And that includes a very vibrant Philly Ronald McDonald House which is on the verge of opening its new tower at 39th and Chestnut.

Hill, who had retired from the Eagles after the 1971 season, moved back home to California in 1973 — “the day after our fashion show,” Lane points out kiddingly, “and I ran Eagles Fly for the next 20 years.

When Kim died in 2011, so noteworthy was her life that her obit ran in the New York Times with this first paragraph:

“Kim Hill, whose childhood battle with leukemia inspired the first Ronald McDonald House, the model for an international network of temporary housing for families of sick children, died on Saturday in Orange, Calif. She was 44.”

For Lane and Eagles Fly it wasn’t all seashells and balloons.

“I’m Leonard’s daughter and the new CEO of the Eagles. Get all this stuff out of my office,” she said, referring to all the Eagles Fly records and promotional material.

So Lane moved everything out of the Eagles offices to his insurance business in Cherry Hill and asked friends and clients to join him on a new board of directors of an independent Eagles Fly for Leukemia. Today the Eagles have their own Eagles Football Charitable Foundation which raises money for autism at Childrens Hospital of Philadelphia.

“Even though Eagles Fly for Leukemia is no longer the official charity of the Eagles we continue to raise funds for needy children and for research to get us to our super goal of 100% cure,” Lane says.

These days Lane is a Naples, Florida snowbird with a home in Cape May Court House, still active in Eagles Fly and president emeritus with an active board of directors whose current president is Lauren McKenna, a partner at the Fox Rothschild law firm.

Lane is especially proud of Eagles Fly — as he is of his Philly heritage:

Born and raised in Audubon, NJ, he graduated from Drexel, where he was in the co-op program — working as a pipefitter’s helper and in marketing for C. Schmidt and Sons, a great Philly brewery, and then for First Pennsylvania bank while he was a student.

After serving in the U. S. Army during the Cuban Missile crisis, he mustered out and started his insurance company — called Lane Financial — in Cherry Hill, from which he retired in 2017.

Lane isn’t looking for a legacy, but try this one on for size, in his words:

“When Kim Hill contracted leukemia in the early 1970s a child had a 10 percent chance of survival, and today we can cure a child.”