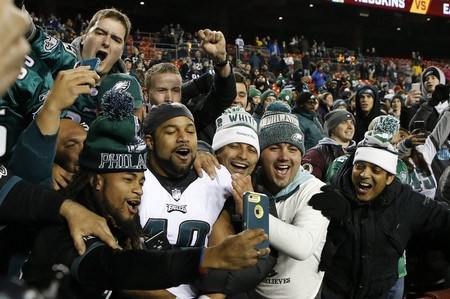 With the Redskins out of playoff contention and the Eagles needing a win to keep their postseason hopes alive, there was a predictably healthy contingent of green-clad Philly fans in the crowd at FedEx Field for Sunday’s regular season finale.

By some estimates, Eagles fans accounted for 80 percent of the 63,188 in attendance, and as depressing as that number might seem, the sights and sounds coming out of Landover were somehow even worse.

The Redskins took the field as a team, rather than by position group, and they did so to loud boos from the Philly faithful.

“Fly, Eagles Fly” was the song of the evening. While the Eagles fans in attendance would’ve drowned out “Hail to the Redskins” with boos had the Redskins Band been given an opportunity to play it, Philly shut out Washington for the first time since 1980.</em

“The Eagles fans are unbelievable,” quarterback Nick Foles said afterward. “I’ve said it before, I know we’re not at [Lincoln Financial Field], but playing at the Linc, running out of the Linc, there’s nothing like it. And then you make this the Linc today. They were out there, they were loud, the support, I mean, the whole stadium was green. That’s always huge. Our fans give us such amazing support and we love it.”

The Redskins threw an interception on their first play from scrimmage and did nothing the rest of the game to quiet the pro-Eagles crowd.

Being in the lower bowl at FedEx Field on Sunday was like being in South Philly, only there wasn’t a place to get a decent cheesesteak.