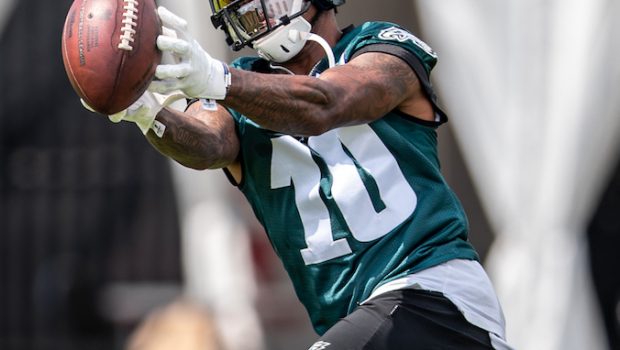 HOW EAGLES D-JAX AND FULGHAM WILL STRETCH FIELD VS. GIANTS!

So, 33-year-old DeSean Jackson and his delicate hammy will play tonight against the Giants at the Linc.

Will it really matter?

How much does he have left?

WR/CB breakdown: D-Jax is back in action, meaning John Hightower’s time as the offense’s lead field-stretching wideout is likely over. Alshon Jeffery (foot) and Jalen Reagor (thumb) remain sidelined, meaning Fulgham and Ward should continue to fill out three-receiver sets.

Carson Wentz actually played much better over the past two weeks in brutal matchups against the Ravens and Steelers.

Unfortunately, Wentz now faces the familiar problem of going to war without most of his top skill-position weapons.

Getting Jackson back helps, but his No. 1 wide receiver Fulgham has his hands full with James Bradberry.