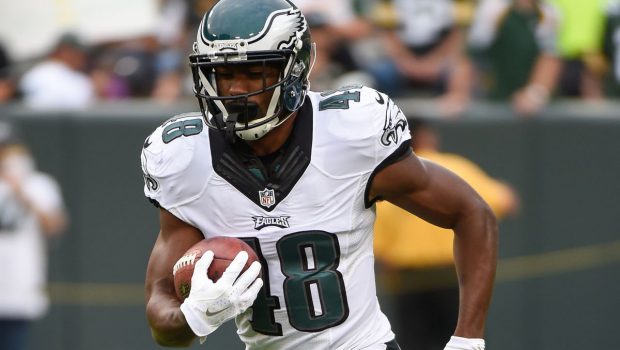 With Raheem Mostert, the Eagles 2015 cast-off, putting together one of the most dynamic rushing performances in playoff history, the Niners throttled the Green Bay Packers for the second time this season, 37-20, on their way to their first NFC championship crown since the 2012 season.

The Eagles signed Mostert as an undrafted rookie free agent in 2015. He led the team in rushing, receiving, and kick return yards in the preseason before Chip Kelly cut him and put him on the practice squad. The Miami Dolphins signed Mostert off the Eagles’ practice squad and that began a journey around the league.

Whereas last week it was running back Tevin Coleman carrying the freight, this one belonged to Mostert, who ran over, around and through Packers defenders all day on his way to 220 yards on 29 carries to go with four touchdowns.

In a season in which multiple players deep on San Francisco’s depth chart have performed well in big moments, Mostert offered the ultimate example on the biggest stage yet.

“I definitely think so,” coach Kyle Shanahan said. “He has earned everything that he’s gotten. He earned today and he’s just such a good person and for him to help us as much as he has on offense and I mean, you guys saw the play he made last week on special teams. … But I can’t say enough good things about Raheem.”

In the first half alone, Mostert rushed for 160 yards on 14 carries with three scores. Those 160 yards were the most in the opening half of a playoff game since the Chargers’ Keith Lincoln had 176 in the 1963 AFL championship game against the Boston Patriots, according to the Elias Sports Bureau.

Mostert and the 49ers’ dominant performance earned them a spot in Super Bowl LIV against the Kansas City Chiefs on Feb. 2 in Miami.

The biggest game of Mostert’s career came as the culmination of a breakout season in which he went from reliable special-teams ace to leading rusher as Coleman and fellow running back Matt Breida dealt with injuries. Since ESPN began tracking tackling statistics in 2001, Mostert is the only player to lead his team in special-teams stops and rushing yards in a season.

All of that came after previous, short stints with the Eagles, Miami, Baltimore, Cleveland, the New York Jets and Chicago that lasted less than a combined two years. In many of those places, Mostert didn’t so much as make the active roster.