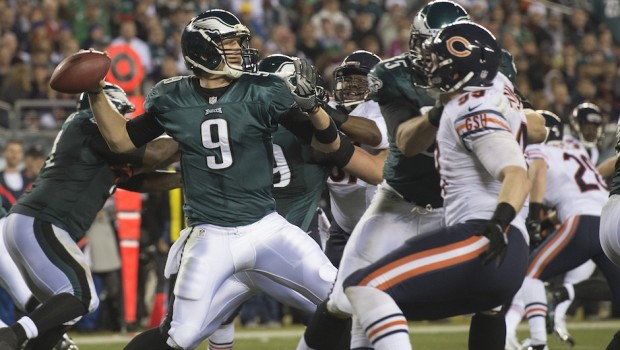 HOW EAGLES AND REST OF NFC EAST LOOK AFTER ONE GAME

It may be too soon to draw conclusions about how 2014 will be different than 2013 in the NFC East, but since Nick Foles (photo above) looked shaky last Friday against the Bears, let’s take a look:

Eagles: It seemed like the Eagles would boast one of the best offenses in the NFL in 2014. Coming off of his superb first season in coach Chip Kelly’s offense, quarterback Foles is expected to build on his 27:2 touchdown to interception ratio from 2013.

In a 34-28 loss to the Chicago Bears, however, Foles matched his two picks from last year, going 6-for-9 for 66 yards. If there’s any time to throw interceptions, it’s in the preseason, but Foles looked uncomfortable in the pocket and both picks came on throws off of his back foot. It’s not a massive concern, but the Eagles need Foles to be mechanically sound and lead the offense if they want to make another playoff run in 2014.

Dallas Cowboys: There are a couple of big concerns facing Dallas — quarterback Tony Romo’s health coming off of back surgery, and improving a woeful defense from last season.

After a preseason defeat against the San Diego Chargers in which Romo did not play, it’s clear the defense still needs work. Dallas allowed 27 points to the Chargers. Perhaps the biggest cause of concern was how San Diego did it; starting quarterback Phillip Rivers and backup Kellen Clemens combined to go a perfect 9-for-9 for 195 yards and one touchdown. That’s not going to cut it for the Cowboys, who ranked 30th in the NFL last season in passing defense (286.8 yards allowed).

New York Giants: Although they scored 20 points in a victory against the Steelers (in addition to 17 against the Bills in the Hall of Fame Game), the biggest uncertainty facing the Giants is the continued installation of the new offense.

Coordinator Ben McAdoo enters his first season at the helm of the offense and the word Giants players and coaches used to describe their mood at the start of training camp was “nervous.” Some of that anxiety appears to be transforming into confidence, but there is still a lot of work left if the Giants want to reduce their league-high 40 turnovers from 2013.

Washington Redskins: Washington is implementing a new offense under new head coach Jay Gruden. Throughout training camp, Gruden has said the read-option — an offense extremely familiar to quarterback Robert Griffin III — would be used sparingly, if at all.

That means Griffin will have to become more of a pocket passer. In Washington’s first preseason game, Griffin went 2-of-4 for nine yards; he did not attempt a rush. It’s hardly a complete sample size, but Griffin did appear comfortable in the pocket. Whether he can lead a dynamic offense for an entire season with his arm, however, is a much bigger question.