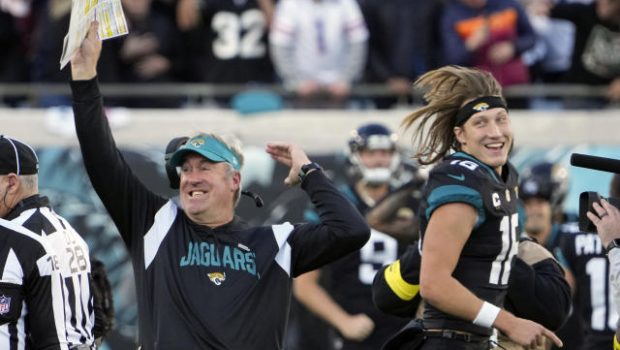 HOW DOUG AND THE JAGS BEAT THE TITANS TO WIN AFC SOUTH!

The Jacksonville Jaguars trailed for more than 57 minutes, managed just one offensive touchdown and didn’t gain a single yard in the fourth quarter, but they got a huge play on defense to beat the Tennessee Titans 20-16 and wrap up the AFC South title.

The Jaguars (9-8), who finished last in the AFC South with a 3-14 record in 2021, are the No. 4 seed in the AFC and will host a playoff game against the No. 5 seed next weekend. It’s the franchise’s first playoff appearance since 2017, the last time the Jaguars had a winning record.

There were some struggles, there were some highs and lows, but in the end, we had the victory. I’m so proud of the guys for the way they have just all season long just hung together through the face of adversity.”

The adversity stretched well into the fourth quarter against the Titans (7-9). The Jaguars trailed 16-13 when safety Rayshawn Jenkins and linebacker Josh Allen combined on the biggest defensive play of the campaign. Jenkins sacked Titans quarterback Joshua Dobbs on a blitz and knocked the ball loose, and Allen grabbed it on one bounce and returned it 37 yards for the touchdown with 2:51 to play.

The play that sent the @Jaguars to the playoffs 👏 pic.twitter.com/GyBkkzIP5j

That bailed out an offense that ran just 47 plays, gained only 222 yards (the Jags’ second-lowest total of the season) and managed minus-1 yard on nine plays in the fourth quarter.

“They [the defense] won us the game tonight,” said wide receiver Christian Kirk, who had six catches for 99 yards and scored the Jaguars’ only offensive touchdown on a 25-yard pass from Trevor Lawrence.

The Jaguars rallied for victories over the Las Vegas Raiders, Dallas Cowboys and Baltimore Ravens after trailing in the fourth quarter and capped that off by doing it again versus the Titans.

“We knew that five-game stretch that we had, we had to find a way to win,” Allen said. “And I think we weren’t finding those ways to win in that moment. When you lose, you find opportunities; and when we were put back in that situation again, we capitalized. We won in overtime, 17 down, 10 down, kept a lead.

“You’ve got to find a way to win, and right now, we’re finding multiple ways to win.”

The Jaguars are now the fifth team since the 1970 merger to win their division the season after posting the league’s worst record. The 2008 Miami Dolphins were the last to do it.

This is the fourth division title in franchise history but just the second in the AFC South (2017). It was the first time the Jaguars swept the season series with the Titans since 2005.

It didn’t look like the playoffs were even a possibility for the Jaguars two months ago, especially after their 21-17 loss to the Denver Broncos at London’s Wembley Stadium on Oct. 30. Lawrence played badly that day — throwing two interceptions, including one in the end zone, and registering the third-worst passer rating of his career — and the Jaguars lost their fifth game in a row. Lawrence said the loss “flipped a switch” for him and that he started playing with a chip on his shoulder.

From that point through Week 17, Lawrence has been one of the best quarterbacks in the NFL: He has led the NFL in completion percentage and has been second in passer rating. His turnaround also flipped a switch for the Jaguars, who were the worst team in the NFL the previous two seasons (4-29). Add in the disastrous and dysfunctional 11-month tenure of Urban Meyer in 2021 and the franchise was in disarray. Pederson turned it around in one season.

“Obviously, to be in this position, to be the AFC South Champion, and just to know the journey that it took us to get here … it’s just a step in the direction that we want to go,” said Pederson, who has made the playoffs in four of his six seasons as a head coach and won the Super Bowl with the Philadelphia Eagles following the 2017 season. “I want it to be sustainable. I just don’t want to be like, OK, you were the 2022 champs and not in ’23. You want to be competing for this division every year.

“But it makes it special just because of the way these guys battled and kind of what they’ve been through in the last two years.”