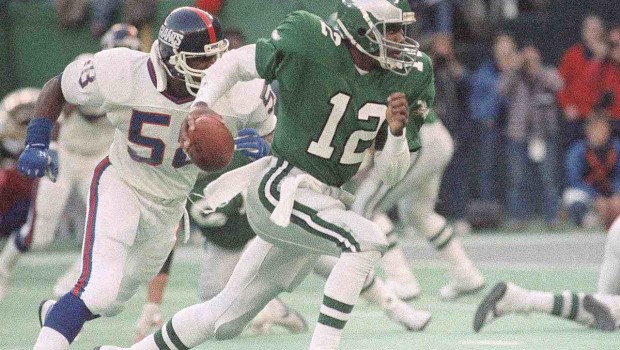 RATING NEWTON AGAINST OTHER DUAL THREATS LIKE EAGLES’ RANDALL

It seems that every decade or so a dual threat quarterback makes NFL defenses cringe just at the thought of preparing to stop him.

Daunte Culpepper could compete with Newton’s size and power. Tarkenton, Russell Wilson and Roger Staubach offered more creativity and elusiveness as scramblers. Young was just as athletic with better passing ability, winning a record six passer-rating titles and retiring with the most rushing touchdowns and second-most rushing yards of the Super Bowl era.

At a chiseled 6-foot-5 and 250 pounds with 4.60 wheels, Newton has the size and speed to match the All-Pro defensive ends giving chase. A half-decade into his career, he gets his offense into the right plays, reads defenses, exhausts his progressions, takes advantage of over-aggressive pass rushes and attacks every inch of the field with one of strongest arms in the league.

It was just 14 months ago that scouts, coaches and executives were bemoaning the death of the running quarterback. Now Newton is the consensus MVP favorite after becoming the first player in NFL history with at least 30 passing touchdowns and 10 rushing touchdowns in a single season.

He’s the ultimate pick-your-poison weapon, capable of burning defenses with his arm on game-breaking downfield strikes or converting short-yardage situations with his legs.

To Newton’s credit, he warned us this historical season was coming.

He reiterated that sentiment last week, telling reporters he might scare critics “because they haven’t seen nothing that they can compare me to.”

A football world tempted to diminish Newton’s prediction as hubris nine months ago is now lining up to pay tribute to his extraordinary skill set.

“I haven’t seen one like him,” Denver defensive coordinator Wade Phillips acknowledged Friday. “None of us have.”

“I’ve never seen nobody that size,” Talib explained. “You look like the typical NFL quarterback. You can sit in the pocket and throw it. And then you can run … you probably could play any position in the NFL that you wanted to. So he’s definitely a unique player. Like I said he’s probably the most dangerous quarterback in the NFL right now. … He’s the best of both worlds, man.”

The presumptive MVP has won over opponents such as Colts cornerback Darius Butler, who acknowledges Newton has developed into the best player in the league.

If Newton reigns supreme during football’s most advanced, complex era, it’s natural to wonder if he is also enjoying the greatest dual-threat season in NFL history.

Newton is a different animal altogether. Whereas most dual-threat quarterbacks compromise a defense by fleeing the pocket and taking off for back-breaking gains, Newton is integral to the Panthers’ chain-moving rushing attack with his deceptive ball-handling and short-yardage prowess.

A two-play sequence in the NFC Championship Game drove home Newton’s rare ability. Facing third-and-10 from the Cardinals 23-yard line, he started to his right and carried safety Chris Clemons for an 11-yard gain and a first down. He ran again to his right on the next play, taking off from the 3-yard line and somersaulting into the end zone for a touchdown.

“Those two plays there — he’s the only quarterback in the league who is doing that,” tight end Greg Olsen said. “That sums him up. He’s different. He’s a special guy. What more can you say?”

Sequences of that unique nature are what led NFL Media analyst Michael Robinson to wonder prior to the start of the playoffs if Newton had emerged as the greatest red-zone threat ever.

What we can say with certainty is that Newton is the most lethal short-yardage weapon the game has seen.

While other dual-threat quarterbacks have run for more yards or posted a higher passer rating in a single season, no one has ever combined all of Newton’s best traits into one package.

It’s fair to claim that the current version of Newton is enjoying an unparalleled dual-threat season, breaking defenses with his incomparable short-yardage and red-zone prowess.

If he’s going to overtake Young as the greatest dual-threat quarterback in football history, though, he must repeat that success for several more seasons.