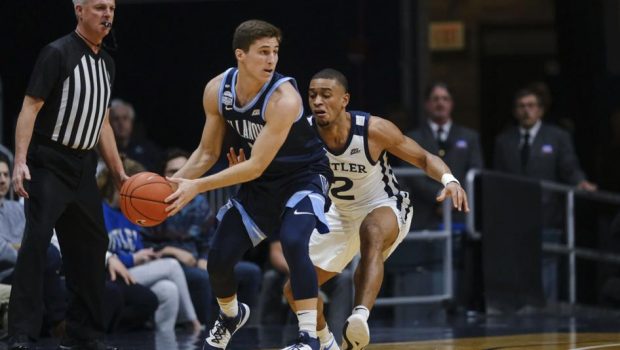 HOW BUTLER BEAT NOVA IN THE BIG EAST GAME OF THE YEAR!

Kamar Baldwin caught Collin Gillespie leaning to cut off an expected drive, stepped back and knocked down a buzzer-beating 3-pointer to give No. 19 Butler a 79-76 victory over No. 10 Villanova.

“He gave me space, so I took it,” Baldwin said. “When I drove it, he kind of backed up so I just went to my stepback.”

Coach LaVall Jordan was counting on it after opting not to call a timeout when the Wildcats tied the score on Saddiq Bey’s 3 with 24 seconds to go.

So, with Baldwin in control of the ball, Jordan let it play out and his top scorer timed the play so perfectly the referees needed a replay review to confirm the shot got off in time and to make sure Villanova wouldn’t get the ball back.

Baldwin finished with 17 points, eight rebounds, three 3-pointers and only one turnover in a little less than 38 minutes on a night the game was delayed for about 15 minutes when water started dripping from the Hinkle Fieldhouse roof.

“That’s tough,” Gillespie said after scoring 28 points. “I was just trying to get back and he hit a tough shot at the end.”

Baldwin’s final shot ruined Villanova’s final flurry. The Wildcats (17-5, 7-3) trailed by 10 with less than six minutes to play, but slowly and steadily cut into Butler’s lead.

Sean McDermott, who had 21 points, drew a foul on Butler’s next possession and made both free throws. Then, Bey scored the last of his 29 points to tie it at 76.

From there, the ball went to Baldwin, who only let it go when he took the shot.

“It’s great, not for me personally but all the energy and all the hard work we put in out there,” Baldwin said. “To celebrate afterward is great.”