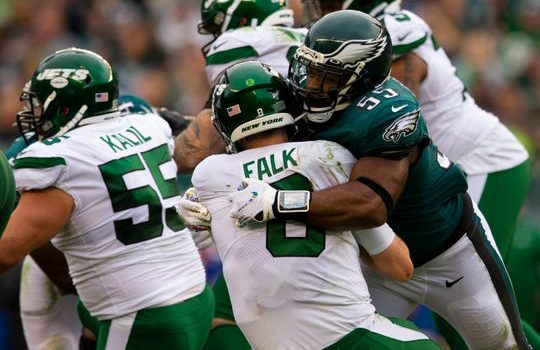 The Eagles defense chalked up 10 sacks yesterday, just one short of the franchise record set in 1991 by Reggie White, Clyde Simmons and company against the Dallas Cowboys.

“As a D-lineman, that’s a dream,” said Brandon Graham, who had three of them on a day when his wife was in the hospital with gall bladder issues. “We were out there dreaming and having fun today.”

The defense had three takeaways, returning two of them for touchdowns courtesy of a Nate Gerry pick-six and an Orlando Scandrick strip-sack return.

The Eagles became the first team in NFL history with 10 or more sacks and two defensive touchdowns in a single game.

It was Graham’s pressure that forced Luke Falk into the Gerry interception on a pass intended for Le’Veon Bell, adding to his three-sack performance.

“It’s great seeing that, because BG comes in and he busts his ass during practice,” said fellow defensive end Derek Barnett. “When he does that and puts it on the field, it’s very encouraging. And then when guys get sacks, the energy just passes along to everybody.”