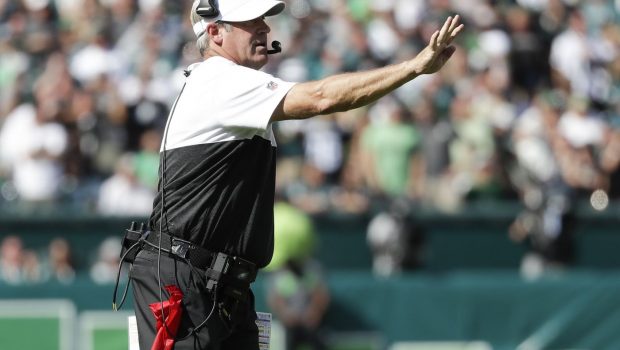 The decision: If Eagles coach Doug Pederson goes for it and fails, he leaves Washington (and hot quarterback Case Keenum) a short field to make it a three-score game. If he punts, he could leave Washington 80 yards from a touchdown, but short-circuiting this possession would leave him with one less chance to score in what could end up being a shootout.

The thought process: In training camp, Pederson told me he coached too conservatively last year, unlike his bold 2017 season that ended in the Eagles’ first Super Bowl victory. “I want to coach aggressive,” Pederson told me on my camp visit. “That’s what I gotta get back to. Last year was not my mentality. I’ve learned from that.” And on Sunday, Pederson said post-game he thought it was “a no-brainer. It was just inside a yard [to go]. I knew I was gonna go for it. We had success on the QB sneaks early in the game. I was coming right back to it.”

The analytics: Eric Eager of PFF reports: “There have been fewer than 130 plays when a team went for it on fourth down before the fourth quarter and inside of their own 35 since 2006. The play carried significant weight for the Eagles, roughly a 33 percent proposition to win the game at the time. Punting in that situation would have made the Eagles probability of winning the game the same, while converting the first down would increase their win probability to 40 percent. Converting on all run plays for a team with the strengths of the Eagles against a team with the strength of Washington is roughly a 73-percent proposition, and given the historical rates of quarterback sneaks, likely higher in this instance. Thus, going for it did have some risk, but the benefits outweighed the cost.”

The result: Carson Wentz converted the first down on a two-yard QB sneak. Eight plays later, the Eagles scored to make it 20-14, and on their next series, they scored another touchdown to go ahead for good. No doubt Pederson will be similarly emboldened the rest of the season, the way he was in 2017.