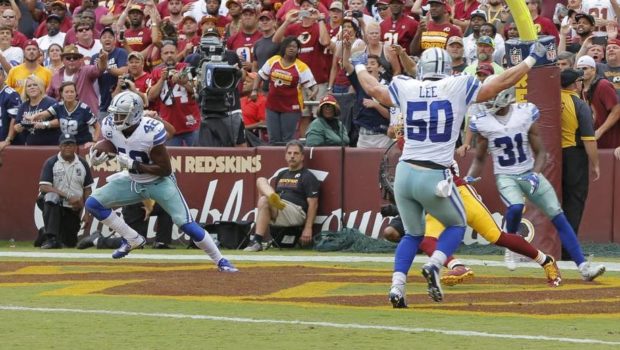 The existential question this early in the NFL season is:

Just how bad is the NFC East?

The Washington Redskins had many chances to put away the Dallas Cowboys yesterday in Washington.

Mistakes kept Dallas in the game. But the Redskins left the door open once too often and the Cowboys put together a fourth-quarter drive to win the game 27-23.

To add insult to injury, the winning touchdown was scored by former Redskins back Alfred Morris, who performed his trademark home-run celebration in the end zone.

The Redskins had a late chance to get a touchdown to pull off a miracle win but Kirk Cousins’ Hail Mary pass went incomplete on the last play of the game. The loss puts them at 0-2 with both losses coming at home.

Kirk Cousins had his moments but starting from when he over threw a wide open Jamison Crowder on the Redskins’ first series he made some critical mistakes. The worst came midway through the fourth quarter when the Redskins had a chance to increase their three-point lead. But he threw a “how didn’t he see him” interception to Barry Church and they came away empty.