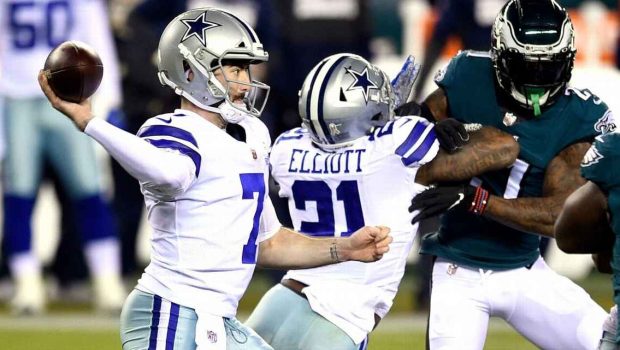 HOW BAD ARE THE COWBOYS? WORST IN THEIR 60-YEAR HISTORY!

The Cowboys who showed up at the Linc last night and lost to the Eagles may have been the worst Dallas team in the 60-year history of the franchise.

How bad are they?

They’re 2-6, and only the New York Giants have a worse record in the NFC.

For just the fourth time in franchise history, the Cowboys have failed to score a touchdown in back-to-back games. Their lone touchdown in the past three games was a garbage-time score against the Arizona Cardinals.

Both of DiNucci’s turnovers were turned into Eagles points, including a 53-yard fumble return by Rodney McLeod that effectively ended the game in the fourth quarter. Opponents have scored 97 points off Dallas turnovers this season, a trend no matter who quarterbacks the Cowboys. The Cowboys have allowed at least 13 points off turnovers in six of their eight games.

Was it something they did or were quarterback Carson Wentz and the Eagles (3-4-1) just bad as well?

The Cowboys did not stop the run very well, with the Eagles’ Boston Scott rushing for a season high in yards (70). But they did have some strong individual performances. DeMarcus Lawrence had a productive game with a sack, some pressures and all-out hustle. Diggs became the first Cowboys rookie to intercept two passes in a game since Sean Lee in 2010.