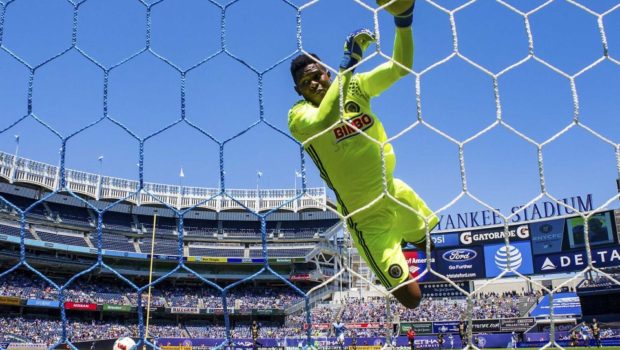 One of the faces of the franchise since he became the full-time starter in 2016, the 28-year-old Jamaican international has been deputized this season by 22-year-old Brazilian Carlos Miguel Coronel and the 20-year-old homegrown Matt Freese.

Freese stepped up initially when Blake left early in the second half with a groin injury against the Montreal Impact on April 20, but suffered an oblique injury in the first half after making his second straight start against FC Cincinnati on May 1. Coronel has done well filling in the last two games after coming on for Freese, after recording a clean sheet in his MLS debut when Blake was away on international duty in March.

In the five games Blake has missed, his two backup ‘keepers have conceded just three times.

“In a lot of ways it’s a good thing – it’s going to sound weird – that Andre actually had an injury and we had to use Matt and Carlos, because now we know going in when we lose Andre they’re both ready,” head coach Jim Curtin said. “They both have had big minutes for us.”

Blake didn’t have to do a whole lot against the Seattle Sounders on Saturday night to register his second shutout of the season and the 29th of his career in 106 starts. Against a bunkered Seattle team that lined up with five changes to the lineup in a 5-3-2 formation, seeking a road point from their third game in eight days, Blake faced only one shot on target and was mostly a spectator in the second half.

“It feels good to be back, you know the guys in front of me did a wonderful job,” Blake said after Saturday’s scoreless draw. “They made it an easy night for me.”

Blake will be out of the lineup again while joining up with Jamaica for the Concacaf Gold Cup, which will be held from June 15 to July 7. How long his absence will be depends, of course, on how far the Reggae Boyz go in the tournament. Should they make it back to the final again as they did in 2017, Curtin has plenty of confidence in his options to cover for the 2016 MLS Goalkeeper of the Year.

While he wouldn’t go so far as to dub them the top goalkeeping corps in the league, Curtin did make the case that his trio under the tutelage of goalkeeping coach Oka Nikolov is among the league’s best.

“That’s three goalies that I think can be starters in the league,” Curtin said. “When you go to your third goalkeeper and have the league pool goalkeeper sitting on the bench and we’re still getting wins, I’d say that’s a luxury a lot of teams don’t have.”