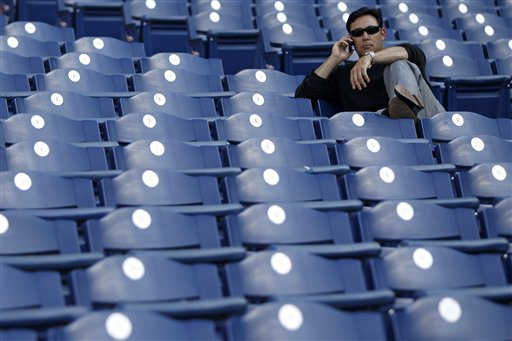 HOW AMARO SCREWED UP YET ANOTHER TRADE DEADLINE DAY

So, if you think our own Art Beitchman was too tough on Phillies GM — Generally Mediocre — Ruben Amaro Jr., (photo above with his new best friend, Citizen Bank Park’s empty seats) for not executing even one trade by Thursday and then dumping on MLB’s other GMs for not be “aggressive enough” to pursue his gaggle of flotsam, here’s Deadspin.com’s Ben Lindbergh’s take:

Ruben Amaro probably didn’t spend Thursday refreshing MLBTradeRumors and bemoaning every other GM’s lack of loyalty as his cell phone buzzed until its battery died; he probably made and fielded phone calls just like his counterparts with the other 29 teams. The Phillies’ lack of activity doesn’t mean they weren’t willing to listen to offers, or even to propose them. It does suggest, though, that either their conception of where they stand in the competitive cycle or their player evaluation process is completely out of step with the rest of the industry’s.

Let’s give Amaro the benefit of the doubt and assume that Chase Utley and Jimmy Rollins wouldn’t have waived their no-trade rights, that Ryan Howard was worthless, that Cliff Lee’s balky elbow scared off too many teams to create much of a market (and rightly so, since Lee was forced out of his post-deadline start by the same injury). That still leaves Marlon Byrd, A.J. Burnett, and Jonathan Papelbon, among other semi-interesting veterans who could have brought something back. It’s no certainty that an Amaro trade would have resulted in a rich return — in July 2012, he traded Jim Thome, Chad Qualls, Shane Victorino, and Hunter Pence and netted close to nothing that’s useful to the Phillies today — but it’s negligent to do nothing for two consecutive deadlines while an aged roster continues to head downhill. No one was expecting an Astros-style teardown, but by acting early or being bolder, the Phillies might have shortened their stay in the cellar.

When Amaro gave in to peer pressure and hired a stathead over the offseason, he conceded that some awareness of sabermetrics might be useful, if only so that the Phillies could gain a better understanding of “how other clubs are evaluating players when we talk about possible trades.” It’s tough to square that quote withreports that Amaro demanded “big prospects” back for Byrd. Amaro seems to think that the onus was on other teams to bowl the Phillies over. In reality, the onus was on him.