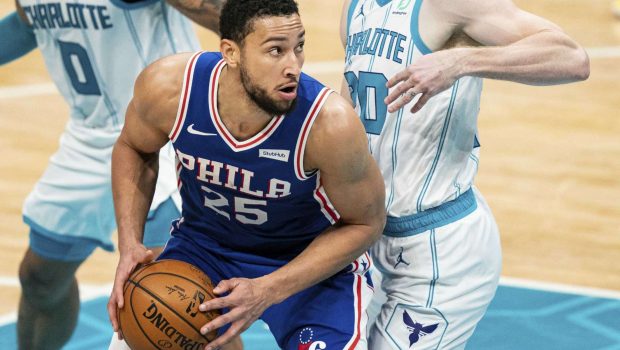 HOW ABOUT SIXERS BEN SIMMONS FOR BRAD BEAL OR ZACH LAVINE!

A month ago the Sixers thought they had a deal to move Ben Simmons for James Harden.

That fell through and Harden is now a Brooklyn Net.

According to a report Thursday from ESPN’s Brian Windhorst, there’s serious talk about the never-ending Bradley Beal trade rumors, which the Sixers have been linked to more than once. With Beal not imminently on the move, Windhorst was asked what else league execs are chattering about ahead of the March 25 deadline:

“Well, Ben Simmons was offered for James Harden, so there’s a question about whether, if a star becomes available, he could be [on the move].

“And another guy that executives are watching out there, because they’re not sure of his future with the organization, is Zach LaVine. Now, I would tell you the Bulls, if they’re going to trade a guy like Zach LaVine, who’s having a career season, would want to trade him for someone like Bradley Beal. So I think it’s not necessarily an either-or. If a player like Bradley Beal is available, that would get Philly or Chicago interested.

“But if you’re looking for players who possibly could be out there on the market, [Simmons and LaVine] are two names that have been mentioned by league executives.”