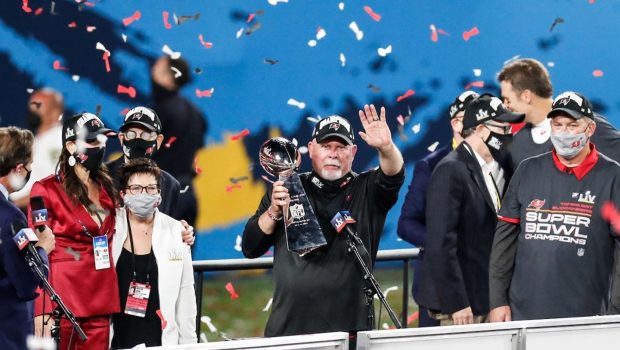 HOW ABOUT BUCS BRUCE ARIANS AND HIS TEMPLE ALUM SUPE CHAMPS!

Last night’s Super Bowl 55 was a big night for the Tampa Bay Bucs, and also for their coaching staff full of Temple connections.

Tampa Bay is only the fourth team in NFL history to win three road playoff games and go on to win the Super Bowl, and Arians was a part of the first team to do it, Pittsburgh in 2005.

This is the second Super Bowl victory for quarterbacks coach Clyde Christensen, who won a championship as an assistant coach with Indianapolis in 2006. Christensen helped coach Tom Brady this year as he won his seventh Super Bowl title, the most of any player in NFL history.For the other six Temple products on the Tampa Bay coaching staff, Sunday night was the first Super Bowl win in their coaching careers, and they each helped the team in various ways to a winning effort.Defensive coordinator Todd Bowles, who won a Super Bowl as a player for Washington in 1987, oversaw a defensive unit that held Kansas City’s prolific offense to nine points, their lowest total since 2017.

Todd Bowles’ defense kept the Chiefs from scoring a touchdown in the Bucs’ #SuperBowl win.Shut down one of the greatest offenses of all time ? pic.twitter.com/od909ntN7j