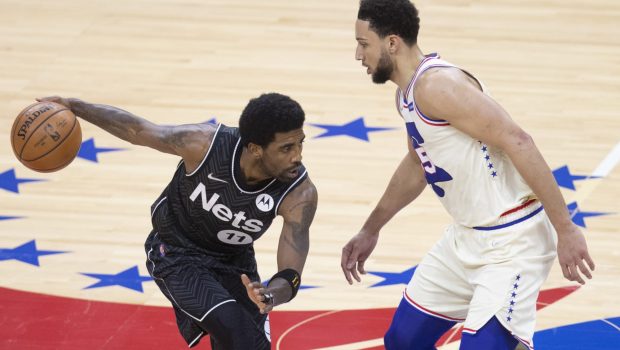 HOW ABOUT A SIXERS TRADE OF BEN SIMMONS FOR NETS PAIN IN THE ASS KYRIE IRVING!

The Sixers would love to peddle Ben Simmons to an unsuspecting general manager who doesn’t mind that his talents do not include putting the ball in the basket.

And now we discover that the Brooklyn Nets may want to unload their very talented but pain in the ass guard Kyrie Irving.

Matt Sullivan, the author of Can’t Knock the Hustle: Inside the Season of Protest, Pandemic, and Progress with the Brooklyn Nets’ Superstars of Tomorrow, Matt Sullivan, says Nets general manager Sean Marks would be open to considering trade offers for Irving, who didn’t play in the final three games of Brooklyn’s season-ending seven-game series against the Bucks due to an ankle injury and also didn’t participate in the league’s playoff bubble in 2020.

Appearing on the Celtics Lab 52 podcast, Sullivan hinted that Marks might be willing to break up Brooklyn’s Big Three by dealing his 29-year-old star point guard, and not just for on-court reasons.

“I’ve heard that Nets ownership was quite upset with Kyrie’s ‘pause,’ especially that maskless party that turned his psuedo-paternity leave into more like a COVID suspension,” Sullivan said. “And in the last week I’ve heard rumblings — whispers, really, because cracking the Nets is kind of like breaking into the Kremlin — that Brooklyn GM Sean Marks would maybe, possibly, apparently be willing to at least listen to a trade offer for Kyrie this offseason.”

Irving, who was traded before when the Cavaliers dealt him to the Celtics for a package of players and draft picks, would likely bring back quite a haul to Brooklyn, and dealing him would give Marks a way to recoup some of the assets he gave up to bring Harden to the Nets. Still, the market for him and the Nets’ willingness to deal him both seem like unknowns at this point.

“Now, I’m not sure what the market for Kyrie is at this point,” Sullivan said. “It’s not like Ben Simmons giving you the headache on the court. It’s that complex personality that comes from off the court. I think it’s been annoying some people in the franchise. I can’t speak to his teammates, who obviously want to play with one of the world’s best and get him back there.”

If Marks doesn’t deal Irving and keeps the core of his team intact, the rest of the NBA could be dealing with Brooklyn’s Big Three for at least the next two seasons (and possibly longer) as Irving, Durant and Harden are all under contract for next year and have player options for ’22-’23.