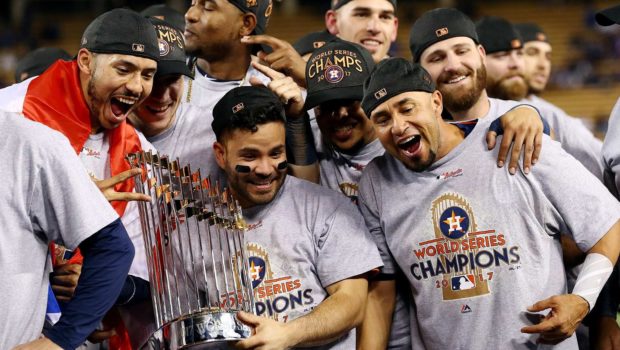 HOUSTON, WE HAVE A WORLD SERIES! ASTROS BLITZ DODGERS 5-1!

All-Star second baseman Jose Altuve fielded a grounder off the bat of Corey Seager and threw to teammate Yuli Gurriel at first base in the ninth inning, and the Astros had a franchise-defining victory by beating the Dodgers, 5-1, in Game 7 of the World Series at Dodger Stadium to win their first championship.

Houston, which pulled out heart-stopping wins in Games 2 and 5, took some drama out of Game 7 when it built an early 5-0 lead, capped byGeorge Springer’s two-run homer in the second off starter Yu Darvish, who recorded only five outs for the secont start in the Series. The Astros kept the Dodgers at bay with a steady stream of relievers to finish piecing together the biggest 27 outs in franchise history. Los Angeles was 1-for-13 with runners in scoring position.

“I got the last out for the Houston Astros becoming world champions,” said Altuve. “It was a ground ball to me. I threw to first, and I think this is the happiest moment in my life in baseball.”

The Fall Classic triumph in seven games came on the heels of a dramatic victory over the Yankees in the American League Championship Series that also took the full seven. The Astros and the 1985 Royals are now the only two teams to win two seven-game series in the same postseason.

“It’s hard to draw it up any better,” Astros manager A.J. Hinch said. “I don’t care who we beat or where we beat them, I just want to be the last team standing, and we’re taking this trophy, this championship vibe we’ve got going back to Houston. We’ll forever be a championship city.”

The franchise that began play in the National League in 1962 — and endured numerous postseason heartbreaks — won its first World Series just four years removed from losing a franchise-record 111 games during an ambitious rebuilding project that netted several key contributors on this year’s 101-win team.

“We had some rough years, but we stuck to our plan,” said Astros general manager Jeff Luhnow. “I want to thank ownership for supporting us the whole way and giving us the freedom to go out and get this group of players. We did it. We knew we had a plan that could get us here, and we got it. World championship.”

After missing the postseason last year, the Astros stormed to their first AL West division title before knocking off the Red Sox in the AL Division Series and Yankees in the ALCS, in which they rallied from a 3-2 series deficit. Beating the Dodgers, who won an MLB-best 104 games, in a hard-fought Fall Classic brought the city of Houston its first major sports title in 22 years. In eliminating the Red Sox, Yankees and Dodgers, the Astros beat the teams with the three largest payrolls in the Majors.

“You look around this ballclub and we’re going to be coming into Spring Training next February with most of the guys here, so really good chance of defending it, and I think we all realize that trophy could stay in Houston for a few years,” outfielderJosh Reddick said.

Three pitches into the game, Darvish was in trouble, as Series MVP Springer doubled into the left-field corner. A fourth pitch and Darvish trailed, as first basemanCody Bellinger fielded Alex Bregman’s bouncer in the hole and threw it behind a covering Darvish and into the Astros’ dugout, putting Bregman at second. Bregman stole third on a slider in the dirt to Altuve and then scored on Altuve’s groundout.

Astros starting pitcher Lance McCullers Jr. helped himself with the bat in the second inning. Brian McCann worked back from 0-2 to walk leading off, was doubled to third by Marwin Gonzalez and, with one out, McCullers bounced slowly enough to second base to allow McCann to score. Springer followed by crushing a 3-2 pitch, becoming the first player to homer in four consecutive games of the same World Series, to make it 5-0.