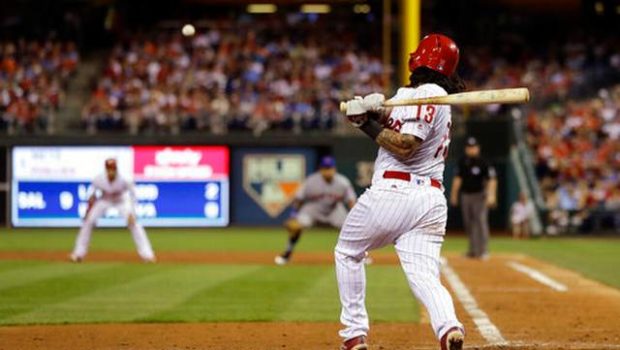 HOTTER THAN HELL NOLA PUNCHES OUT METS AS PHILS WIN 3-1!

Aaron Nola held an opponent to two runs or fewer for his 10th straight start, Freddy Galvis (above) had a go-ahead single and the Phillies beat the New York Mets 3-1.

Nola (9-7) gave up one run and two hits in seven innings with eight strikeouts and two walks. He is 6-2 with a 1.71 ERA in his last 10 starts and is the only Phillies pitcher since 1900 to have 10 straight starts of at least six innings while allowing two runs or fewer, according to the Elias Sports Bureau.

“I’m not trying to do too much,” Nola said. “I’m just trying to simplify things. You’re taught to keep the ball down, and that’s what I try to do.”

Cesar Hernandez and Tommy Joseph also had RBI for the Phillies, who won despite just five hits. Odubel Herrera extended his career-best hitting streak to 15 games with an eighth-inning single.

New York lost at Citizens Bank Park for the first time in six games this season. Having already traded Jay Bruce, Lucas Duda and Addison Reed, the Mets dealt veteran infielder Neil Walker and cash to the Milwaukee Brewers for a player to be named. Walker was scratched from New York’s lineup and left the ballpark in the sixth inning.

Steven Matz (2-6) dropped to 0-5 in his last eight starts, but improved over recent outings by allowing two runs and four hits in 5 2/3 innings. Matz is 0-5 with a 9.51 ERA in his last seven appearances.

“He was much, much better,” Mets manager Terry Collins said. “He kept us in the game. A couple of ground balls. Other than that, he pitched well.”

Matz held the Phillies hitless until Nick Williams’ leadoff infield single in the fifth. Maikel Franco singled, Nola sacrificed, and singles by Hernandez and Galvis put the Phillies ahead 2-1.

Ricardo Pinto struck out Cespedes on a 98 mph pitch to strand two runners in the eighth, and Tommy Joseph hit a sacrifice fly against Erik Goeddel in the bottom half.

Luis Garcia came on with one on and one out in the ninth and earned his second save in his fifth tries by striking out pinch-hitter Wilmer Flores and retiring Travis d’Arnaud on a groundout.