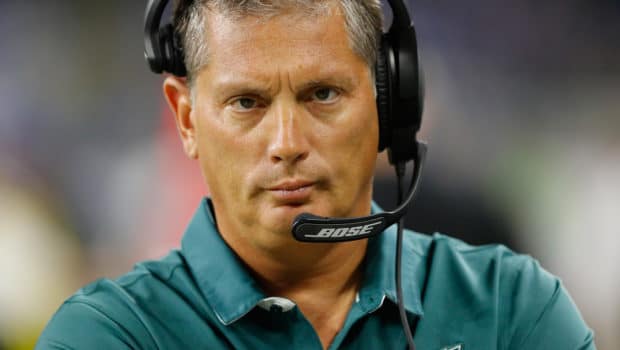 This is the very definition of a “distraction” as the Eagles prepare for tomorrow’s game at the Linc against the Cowboys, courtesy of Pro Football Talk:

The name that keeps coming up in regard to a new Giants head coach is Eagles defensive coordinator Jim Schwartz…the Ernice Accorsi connection would be the thing that puts them on the same page. Beyond Schwartz and Accorsi having a common tie to Maryland, it’s believed that Accorsi leans heavily on advice from Patriots coach Bill Belichick. It’s also believed that Belichick has advised Accorsi to recommend that Gettleman hire Schwartz.

Some regard Belichick’s recommendation of Schwartz as an effort to keep offensive coordinator Josh McDaniels and V.P. of player personnel Nick Caserio in place for another year. The Gettleman hire necessarily keeps Caserio in New England, which in turns makes McDaniels far less likely to leave for the Giants. By selling Schwartz to Accorsi, Belichick set up a one-two combination that didn’t entail McDaniels or Caserio (or both) from leaving for what would have been, for them, a very attractive job.