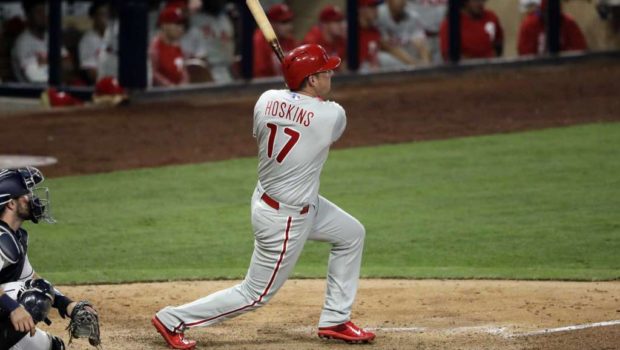 Cory Spangenberg homered for the third time in four games and as the San Diego Padres cruised to an 8-4 victory over the Phillies.

Spangenberg set a career high with his 12th home run, and Dinelson Lamet (7-4) turned in one of his finest performances on the mound.

A rookie right-hander with a power arm, Lamet held the Phillies hitless over the first 4 2/3 innings in winning for the fourth time in his last five starts. He tied a career high by working seven innings, allowing two runs, three hits and a walk. He struck out seven.

The Phils didn’t put a batter on base until Maikel Franco was hit by a pitch to open the fifth, which preceded Jorge Alfaro’s first major league homer to cut the Padres’ lead to 4-2.

Rhys Hoskins, called up last Thursday, hit his third homer in two days, a two-run shot in the ninth. Cesar Hernandez had two of the Phillies’ six hits.

The Padres tacked on four unearned runs in the fifth, taking advantage of Franco booting Wil Myers’ easy grounder at third. Alfaro, the catcher, also had a throwing error.

Hector Sanchez struck the big blow with a two-run homer as the Padres pulled away to an 8-2 lead.

“I think he was getting too anxious to turn a double play and got ahead of himself,” Phillies manager Pete Mackanin said of Franco’s miscue.

Phillies starter Mark Leiter (1-3), a reliever for most of his rookie season, pitched five innings and was charged with eight runs (four earned) and seven hits. He walked three and struck out one.

“Definitely not my best command,” Leiter said. “I’ve just got to make better pitches to get out of some of these jams and not let it get away from us. Try to keep it close.”