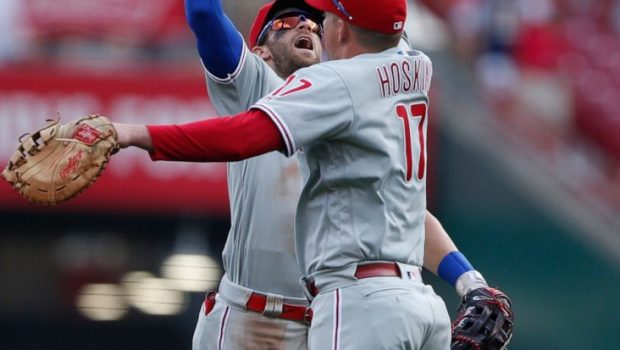 HOSKINS HEATS UP JUST IN TIME AS PHILS STAY 2 1/2 GAMES OUT!

Harper extended his hitting and scoring streaks to 10 games with a liner into the right-field seats in the eighth inning off Wandy Peralta. Hoskins followed two pitches later with his second homer of the game.

“He looks really relaxed and confident,” Phillies manager Gabe Kapler said of Hoskins, who was ejected from Saturday night’s game against the Mets for arguing balls and strikes. “Obviously, he wants the calls to go in his direction. We’ve seen that the past few days, but he’s not letting it beat him down.”

After beating the Mets 5-2 on Sunday night, the Phillies have two straight wins for the first time since Aug. 20-21 at Boston. They remain 2 1/2 games behind the Cubs for the second NL wild card after Chicago beat Seattle.

Relying on his curveball, Smyly (3-6) tied his season high with eight strikeouts while earning his first win in six starts since beating San Francisco on July 30. He gave up four hits, one run and three walks in 5 1/3 innings.

The Phillies never trailed after Kingery’s shot over the center-field fence in the second, his 16th homer of the season.

“It is no secret that I have to cut down on home runs, but I got ahead of a lot of hitters today,” said DeSclafani, who gave up multiple homers in a game for the seventh time this season. “It was two pitches. Basically the one to Kingery was elevated a little bit, but he had an off-balance swing that he got on the barrel of the bat and it barely got out. I guess you’ve got to tip your cap.”