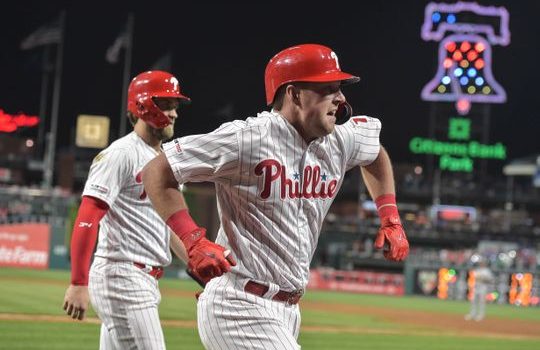 HOSKINS FASTEST PHILLIE TO 10 HOMERS SINCE UTLEY, IBANEZ IN 2009!

Rhys Hoskins launched his 10th homer of the season Friday night in the Phillies win over the Nats.

And that puts him in fast company.

He is the fastest player to 10 home runs in a Phillies uniform Chase Utley accomplished the feat in 30 in 2009 and Raul Ibanez did it in 31 in the same year.

The Phils now have a 1 1/2-game lead on the Braves for first place in the National League East and is starting to look every bit of the class in the division. Hoskins is a huge part of that.

A fifth-round pick in 2014, Hoskins went 2 for 3 with that home run and three RBIs on Friday and now has 10 home runs on the season.

The home runs are impressive, but the amount of games in which he accumulated them is truly notable.

The emerging superstar is batting .288 with a .415 on-base percentage on the season and is a big part of why the Phillies are amongst the top 10 in multiple offensive categories as a team.

After a bit of a sophomore slump in 2018 in which he batted .246, Hoskins has both maintained his power and increased his OBP and batting average this season. And while the Phillies added Bryce Harper to be the cornerstone of this franchise for the next 13 years, the team actually may have already had one, and consequently, now possesses two.