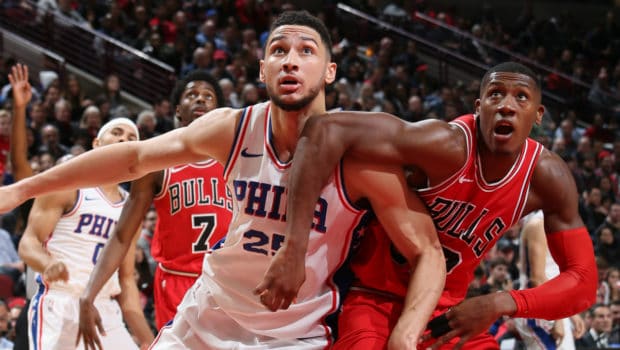 Nikola Mirotic and Kris Dunn each scored 22 points, and the Chicago Bulls topped the Sixers 117-115.

Mirotic and Dunn each hit huge shots down the stretch as Chicago rallied in the fourth quarter. Mirotic also grabbed 13 rebounds, helping the Bulls remain unbeaten since he returned Dec. 8 after missing the start of the season with facial fractures after he got into a fight with teammate Bobby Portis during practice.

Seven players scored in double figures for Chicago. Justin Holiday scored all 20 of his points in the first half, and Portis finished with 12 points and 10 rebounds.

Ben Simmons had 19 points, 12 rebounds and nine assists for the Sixers, who lost for the sixth time in seven games. Dario Saric scored 20 of his 27 points in the second half.

Philly played without Joel Embiid, who rested on the first night of back-to-back games for the Sixers. The 7-foot center, who scored 34 points in Friday night’s triple-overtime loss to Oklahoma City, did not make the trip to Chicago.

But Simmons and Saric helped the Sixers get in position to stop Chicago’s win streak in the fourth quarter, up 107-99 with 3:49 left. The Bulls responded with one of the best stretches of their suddenly interesting season.

Simmons had a chance to tie it in the final seconds, but missed wildly and Mirotic grabbed the rebound.

Richaun Holmes had 14 points and seven rebounds for Philly, which went 14 for 33 from 3-point range. J.J. Redick finished with 12 points.

Holiday got hot at the end of the second quarter, scoring 15 points in the final 4:38 of the first half. The scoring spree began with consecutive 3s and also included a four-point play and an impressive reverse jam, helping Chicago to a 67-59 lead at the break.