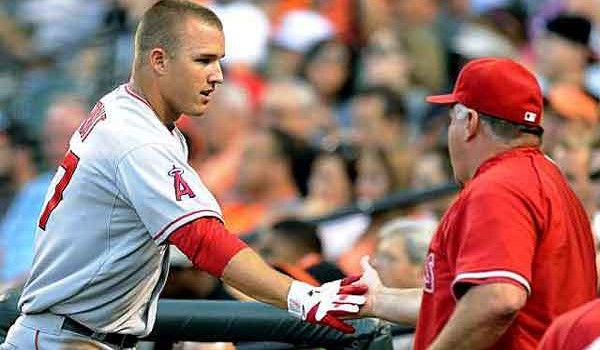 HOMECOMINGS FOR TROUT AND SCIOSCIA

And their homecomings were as different as, well, Delaware and Cumberland counties.

Angels manager Scioscia, a former Dodgers catcher, has been making trips here for decades, and they have always been hectic, with visits to family and friends squeezed around the games.

But they were nothing compared to the demands on Trout as the Angels center fielder, who grew up about 45 miles to the south, in Millville, N.J., prepared for his first game in Philly with 6,000 to 7,000 fans from the Millville area in Citizens Bank Park to support him.

“My obligations,” Scioscia said, “were that I used to have to eat lasagna at my grandmother’s house.”

To accommodate all the media requests, Trout, who spent Monday night at his parents’ house in New Jersey, did a 15-minute news conference, which was attended by about 100 media members, before the game.

He met and posed for pictures with members of the Millville High School varsity team, which was on the field during batting practice. He shook hands with Millville Mayor Mike Santiago. An hour before the game, the stadium was filled with thousands of fans wearing Angels No. 27 jerseys or Trout T-shirts.

“I love the support,” Trout said. “The hard work, the dedication, all the sacrifices … just to have the support behind you, that [thousands of] people are coming from Millville, that’s a lot of fans. It means a lot, and I’m very excited about tonight.”

Trout was a huge Phillies and Eagles fan as a kid, and the last time he was at Citizens Bank Park for a game was on Oct. 29, 2008, when he hung out with his buddies in the parking lot tailgating during Philadelphia’s World Series-clinching 4-3 win over Tampa Bay. Trout joined the victory parade down Broad Street.

“Growing up as a Phillies fan and Eagles fan, it’s going to be pretty cool to see the reaction,” Trout said. “I know when I was growing up going to the Eagles games, if I saw someone with a different jersey on, they were getting booed. So it’s going to be interesting.”