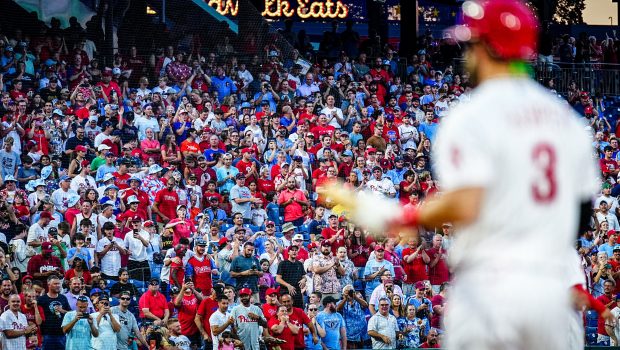 Anything Bryce Harper gave the Phils last night in his return to the lineup could have been considered gravy.

After all, they went 32-20 during hus absence because of a broken thumb.

And the reigning NL MVP didn’t disappoint the 30,000-plus fans who came to CBP.

He hit a two-run single in his first at-bat, and the Phillies beat the Pirates 7-4.

Harper grounded out twice and lined out sharply in his three other at-bats in his first action since being hit on the hand by San Diego Padres left-hander Blake Snell on June 25.

The reigning NL MVP batted cleanup as the designated hitter and helped the Phillies win their fifth straight game.

“I’m just happy to be back, get in there and help this team win,” Harper said.

“I’m just trying to come in here and not screw it up; they’re playing so well,” Harper said. “It’s been fun to be able to watch and even more fun to go out there and be around them.”

Rhys Hoskins singled, doubled and drove in a run for the Phillies.

Bryan Reynolds, Ben Gamel and Rodolfo Castro homered for the Pirates, who have lost six straight and 12 of 14. Pittsburgh dropped to 47-78.

Harper jogged out for warmups to loud cheers and “Let’s Go Harper!” chants 25 minutes before first pitch. The ovation from the announced crowd of 30,546 was deafening when Harper was introduced 20 minutes later. The cheers grew even louder, accompanied by a standing ovation and “M-V-P!” chants, when he stepped to the plate with no outs and the bases loaded in the first.

“I started laughing because it’s awesome,” Harper said of the reception. “I love those types of moments, I love those opportunities, I love jam-packed crowds and being able to play in front of 40,000 people. That’s what it’s all about.”

With a 2-2 count against Bryse Wilson (2-8), Harper lined a hard two-run single into right field.

“My teammates set me up for a perfect opportunity right there, and I was able to come through,” he said.

Harper went 5 for 8 with two homers, two doubles and six RBI in a pair of rehab starts at Triple-A Lehigh Valley on Tuesday and Wednesday. The Phillies had planned to keep Harper in Triple-A through Saturday, but his return to the big leagues was moved up after his walk-off double for the IronPigs on Wednesday night.

The fans weren’t the only ones happy to see Harper back in Philadelphia. His wife, Kayla, posted a photo on social media of her seated at Citizens Bank Park wearing a shirt with multiple images of Harper on it. She captioned the post, “wearing my heart on my sleeve.”

“We’re talking about one of the best players in the game,” Shelton said. “Anytime you add a player of that caliber back to their lineup, it lengthens it out. He’s such a special hitter. He does a lot of different things. And when you put him there in the middle, it makes a really good lineup even better.”

Phillies starter Bailey Falter (2-3), filling in for injured right-hander Zack Wheeler, gave up three runs on five hits in six innings with six strikeouts and no walks. Brad Hand pitched a scoreless ninth for his fifth save.

Philadelphia went up 6-0 in the second on Hoskins’ RBI single, and he later scored in the frame when shortstop Newman mishandled Realmuto’s grounder.

“We didn’t play great defensively and put ourselves in a hole,” Shelton said. “Against a club like this, we cannot give away extra outs.”

Newman’s two-run homer in the fourth and solo shots by Castro in the fifth and Gamel in the seventh, both leading off the innings, pulled Pittsburgh within 6-4 before Bryson Stott’s RBI single in the bottom of the eighth.

“I give our guys credit to continue to go,” Shelton said.