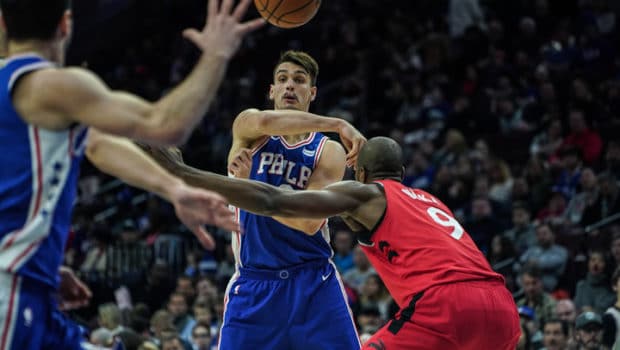 HOME FOR THE HOLIDAY, SIXERS WHACK RAPTORS TO GO 20-20!

Yesterday was Martin Luther King Day, when Americans are asked to perform a day of service in the way the slain civil rights leader would have.

And the American basketball team known as the Sixers performed that service by whacking a great team from Canada.

Joel Embiid had 34 points and 11 rebounds and the Sixers held off the Toronto Raptors 117-111.

“Look at some of the things we ended up doing at the end of the game. All we really had to do was dribble it out and instead we’re playing volleyball,” Sixers coach Brett Brown said before lamenting his team’s seven fourth-quarter turnovers. “That’s the stuff that keeps me up really, really late at night.”

T.J. McConnell added a career-high 18 points and eight assists and JJ Redick scored 15 before leaving with a left leg injury for the Sixers, who never trailed and shook off Ben Simmons’ foul trouble to win for the fifth time in six games.

“We’ve been in this type of position a lot this year,” Embiid said.

They saw a 21-point lead cut to 102-101 on DeMar DeRozan’s 3-pointer with 3:01 left. Simmons responded with a driving layup and Dario Saric (above) hit a 3 on the next possession to get the lead back to six.

Embiid hit four free throws in the final 25.3 seconds to put it away as he motioned for the crowd to get to its feet.

DeRozan scored 24 points and Kyle Lowry struggled in his return from a three-game absence because of a bruised tailbone. The Raptors lost backup guard Fred VanVleet to a right knee injury early in the fourth quarter in their second straight loss.

The Raptors missed their first 10 3-point attempts, and shot 40 per cent from the field, two days after a narrow loss to Golden State followed a blowout win over Cleveland.

“We have to get our motors going no matter who we play. It can’t just be Cleveland or Golden State,” Raptors coach Dwane Casey said.

Lowry and Simmons, who had 12 points and six turnovers, were ejected with 6.5 seconds left after a dustup near midcourt. No punches were thrown in the game that included six technical fouls.

“I don’t play around,” Simmons said. “I’m not going to take (crap) from anybody.”

The Sixers led 59-43 before the Raptors closed a dismal first half on a 6-0 run. Unable to stop Embiid (18 points) and unable to shoot from the outside (0 of 7 from 3-point range), the Raptors couldn’t take advantage of Simmons missing the final seven minutes with three fouls.

Simmons picked up his fourth foul 24 seconds into the third quarter but stayed in, and the Sixers built a 21-point lead with the help of technical fouls against VanVleet and Casey.