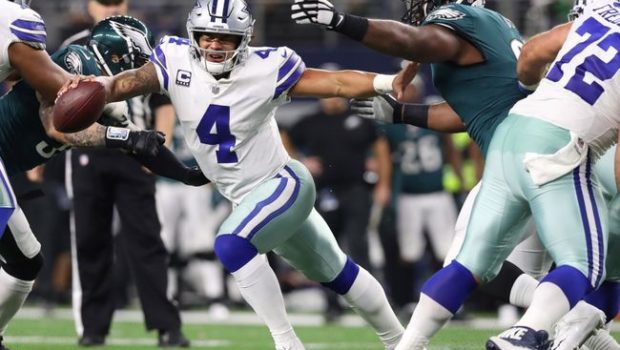 Tomorrow’s Eagles-Cowboys game at the Linc is an atypical Week 17 match-up match-up because it is meaningless to both teams.

The Birds have wrapped up home field throughout the playoffs and the Cowboys are going home empty.

In last year’s season finale between the Cowboys and Eagles, the roles were reversed.

So who will come out on top in this meaningless season finale? Our collection of experts have the lowdown for you:

The Cowboys blew any shot at the playoffs last week by losing at home to Seattle. The Cowboys would love nothing better than to show the Eagles they will be back in force next season. Philadelphia has nothing to play for and quite possibly could decide to rest some key players.

This game means nothing. That’s sad. Cowboys-Eagles this late in the season should mean something. The Eagles could rest players in this spot. Dallas will play to win. They get the victory.

Has a game between these two rivals ever been less meaningful?

Why is Dallas trying to throw touchdown passes to Terrance Williams on first-and-goal from the 3. Feed Zeke. The Raiders just ran right through the Eagles’ front.

Nick Foles has kept the Eagles from collapsing and in possession of the No. 1 seed in the NFC since the injury to Carson Wentz. But they are not the same team. The Cowboys got Ezekiel Elliott back, but losing to the Seahawks ended their postseason hopes.

The Eagles (13-2) clinched home-field advantage throughout the playoffs, so beyond keeping the rust off before a two-week break and some notion of pride in beating an N.F.C. East rival, there is little reason to think they will keep the starters in long enough to win. The Cowboys (8-7), on the other hand, have some superficial reasons to care. Ezekiel Elliott needs 120 rushing yards to hit 1,000 for the season, and a ninth win would give Dallas consecutive winning seasons for the first time since 2008 and 2009.

That Philly is unbeaten at home but a home ‘dog owes to Birds having already clinched home-field throughout playoffs, so no stakes. But that goes for eliminated Dallas, too. Crapshoot pick because who knows how much starters will play, but still like the better team at home.

The way the Cowboys exited so meekly from playoff contention last week could play into how they come out in a meaningless game against a rival with nothing for which to play. The Eagles do need to get much sharper than they looked against the Raiders, so there might not be as much resting of starters as expected, especially with a bye coming.

Look for the Eagles to come out and try to get Foles and the offense into an early rhythm. They want to get the backup-turned-starter some confidence and more playing time with the starters before the bye. Expect enough first-stringers to play to win an ugly one.

The Cowboys may play their starters as well, but that may not matter. I think after last week’s loss, Dallas is ready to pack it in.