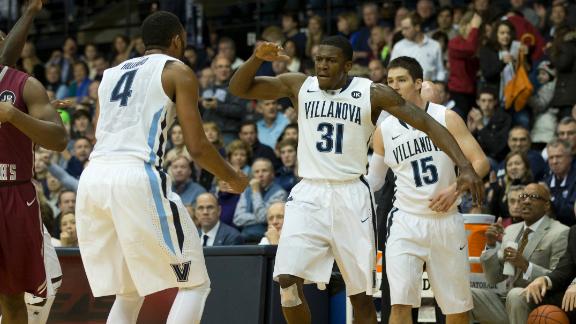 Here is the question on the Big Five and Big East tables:

Is Villanova a collection of very good players, none of whom is a dead-bang NBA prospect; or is it simply a fine-tuned group fashioned by Jay Wright to withstand the rigors of modern college basketball?

The answer is both.

And the Wildcats have won their first eight games of this young season without anyone scoring more than 20 points, such as yesterday when they demolished St. Joseph’s 74-46 in what used to be called the Holy War.

The Wildcats (8-0) scored the first eight points, led by 15 only 6 minutes into the game and treated the rest of it like a glorified exhibition against one of their biggest rivals.

Without a true No. 1 scorer, the Wildcats continue to play solid team ball under coach Jay Wright. Up 25 in the second half, no Wildcat had hit double-digit scoring.

Ryan Arcidiacono scored the first basket of the second half and became the ninth Wildcat to score.

“I wouldn’t say we have one guy that’s super talented carrying the team,” Wright said. “I think we’ve got eight guys that could carry the team.”

The Hawks (4-4) learned that lesson the hard way.

The Wildcats had wins on consecutive nights last week against ranked teams Michigan and Virginia Commonwealth to earn the Legends Classic title. They thumped Delaware on Sunday and kept on rolling in a win Wednesday against La Salle.

The Hawks were just the latest team to have no answer to a team that wants their first Final Four appearance since 2009.

Daniel Ochefu and Darrun Hilliard opened the game with nearly identical layups. Josh Hart hit a 3, Kris Jenkins followed with two straight 3-pointers of his own and Ochefu brought down the house with a thunderous dunk for a 19-4 lead as Villanova quickly set the tempo.

Hart scored 12 points on three baskets from the floor.

“I feel comfortable when I’m open, or when they find me in transition,” Hart said.

The Hawks, who had 20 turnovers, were never comfortable in this one. Saint Joseph’s missed 18 straight shots over 11 minutes, 49 seconds spanning the first and second half. Trailing 44-24 at halftime, the Hawks scored only four points in the first 10 minutes of the second half. The Hawks missed 21 of 22 shots in one stretch.

The Wildcats have found their groove from 3-point range after a slow start behind the arc this season. They were 33 of 114 (29 percent) over the first five games, then made 20 of 46 (43 percent) in the last two games. Led by two each from Dylan Ennis and Jenkins, the Wildcats made 8 of 15 in the first half, the kind of long-range accuracy that ensured the Hawks could not rally.