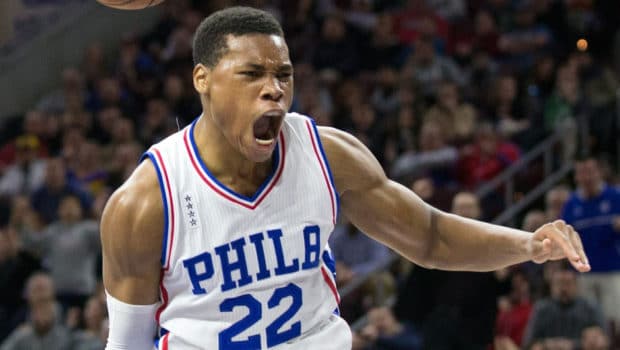 Dwight Howard had 22 points and 20 rebounds to lead the Atlanta Hawks to a 99-92 win over the Sixers last night in Georgia.

The Hawks have won two straight following a seven-game losing streak that stunted their push in the Eastern Conference playoff standings. Atlanta is still in the fight for a fifth seed with Milwaukee, Indiana and Miami. The Hawks boosted their playoff hopes with a win a night earlier against Phoenix.

“We gave seven games away,” Howard said. “We need these games going into the playoffs. I thought the level of play was pretty good over most of those games.”

Tim Hardaway Jr. and Kent Bazemore each scored 19 points for the Hawks.

Richaun Holmes (above) led the Sixers with 25 points and Dario Saric had 15. Saric was only 5 of 18 from the floor, but remains the leading contender for NBA Rookie of the Year.

The Hawks led by as many as 11 points, but struggled to put the Sixers away.

Nicknamed “Simba,” Justin Anderson had the Sixers fans roaring when his monster dunk cut it to 83-81. He converted a three-point play that pulled the Sixers within four and kept alive the hope they could knock off playoff-bound Atlanta.

The short-handed Sixers (they had only eight players) had the verve but not the talented depth to do much more than keep it close down the stretch.

Coach Brett Brown remained optimistic that better days are ahead for the Sixers and these are the type of games they win with a healthy core.

“I’ve got, like, nine or 10 guys that we can legitimately move forward,” he said. “That wasn’t that many (in prior years) when we were circling three or four, maybe five. This year is different. For that reason, you feel like the corporate knowledge and the purpose of what we’re teaching and how we’re growing these guys has a greater chance to be with us next year.”

Holmes was charged with stopping Howard and found the player called “Superman” was out to dominate.