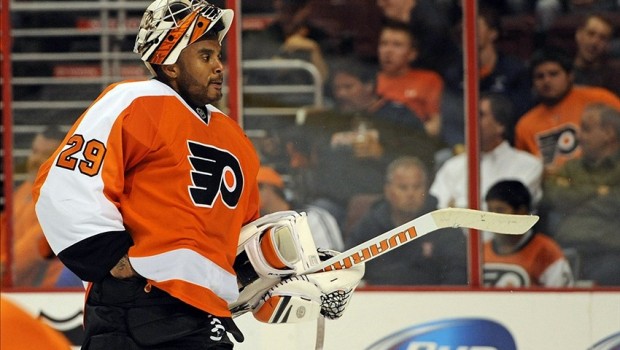 THE HITS JUST KEEP ON COMIN’ — FLYERS’ EMERY OUT TONIGHT

The Flyers have certainly had a star-crossed 2014-15 with injuries, underachievement and lots more adding to their woes.

Flyers goalie Ray Emery, who has been a stalwart since Steve Mason has been out with injuries, is day-to-day because of a lower-body injury, general manager Ron Hextall announced Monday.

Though Emery practiced Monday, he did not travel to Raleigh, N.C., where the Flyers will play the Carolina Hurricanes tonight.

Emery is 10-10-4 with a 3.15 goals-against average and .893 save percentage in 26 games, and 4-1-3 in his past eight. Rob Zepp started and won back-to-back games last weekend against the Nashville Predators and Washington Capitals.

Zepp is likely to start tonight against the Hurricanes. Mason, making a comeback from arthroscopic knee surgery, will back up and may play as soon as Thursday, according to the Inquirer.