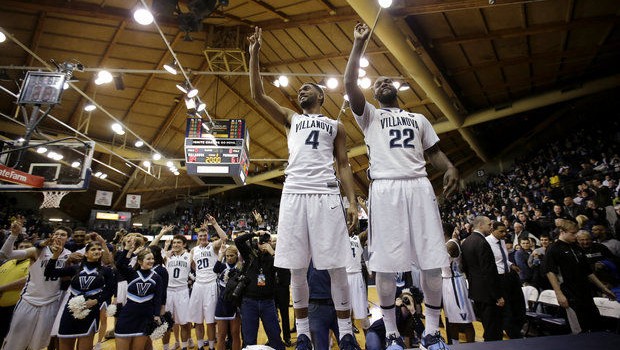 If Villanova intends to make a deep run in next month’s NCAA tournament, their most important player isn’t JayVaughn Pinkston, Ryan Arcidiacono or Daniel Ochefu — though they are vitals cogs.

No, the player who must maintain his excellent regular season performance and step it up a notch is Darrun Hilliard.

And he showed why last night when he scored 19 of his 24 points in the second half, Pinkston had 16 points and eight rebounds, and No. 6 Villanova clinched at least a share of its second straight Big East regular-season title with an 89-61 rout of No. 25 Providence at the Pavilion.

Before the contest, Hilliard and Pinkston were honored for Villanova’s senior night ceremony. It was the Wildcats’ last of the season at the Pavilion, their on-campus gym where they’ve won 26 straight dating back to the 2012-13 season.

”Coming from Bethlehem, not a lot of things come out of there, so it was a special moment,” Hilliard said. ”Seeing my mom cry kind of broke me a little bit, but I was trying to hold it in and stay focused on the game.”

Arcidiacono added 13 points and four assists for the Wildcats (26-2 overall, 13-2 Big East), who shot 53 percent from the field and 52 percent from 3-point range en route to their ninth straight win.

”It’s amazing how all the speaking heads are supposed to be professionals and they’re not talking about Villanova as a No. 1 seed,” Providence head coach Ed Cooley said. ”They’re playing as well as anyone in the country and they have a chance to have a magical, magical run in March right from our league. Easily in my eyes, they should be in the discussion as the second No. 1 overall seed (behind Kentucky).”

After Providence pulled within six early in the second half, Hilliard took over. The senior guard scored 14 points in a four-minute stretch, including four 3-pointers, to give Villanova a 54-36 lead with 13 minutes left.

Villanova kept surging, completing a 23-6 run to build a 63-38 advantage midway through the second half before easing home with a dominant win that gave them a three-game lead in the Big East with three to play.

Hilliard is averaging 18.7 points per game during Villanova’s nine-game winning streak. He came out to a standing ovation with 3:28 left, shortly before Pinkston exited to similar cheers.

”These are two guys that never thought of giving in or giving up on Villanova,” Wright said. ”It really is special to me. Each group has something unique to it, but this group is always going to be really special because of what they went through and where they’ve brought us.”

A day after entering the Top 25 Poll for the first time since the 2003-04 season, Providence sputtered from the opening whistle. The Friars committed five turnovers before making their first shot, falling behind 9-0 four minutes into the contest and then 28-13 with 6:09 left in the first half after Arcidiacono and Josh Hart drilled back-to-back 3-pointers.

Providence closed the first half on a 7-0 run but still trailed 34-25 at the half despite shooting 50 percent from the field before the break.

LaDontae Henton and Kris Dunn, two of the top five scorers in the Big East, combined for just seven points in the first half and 16 for the game. Dunn, who entered the contest averaging 15.6 points per game, finished with four points on 2-for-10 shooting and committed six turnovers.

”That was probably our best defensive effort of the year,” Wright said. ”I was really proud of our guys.”