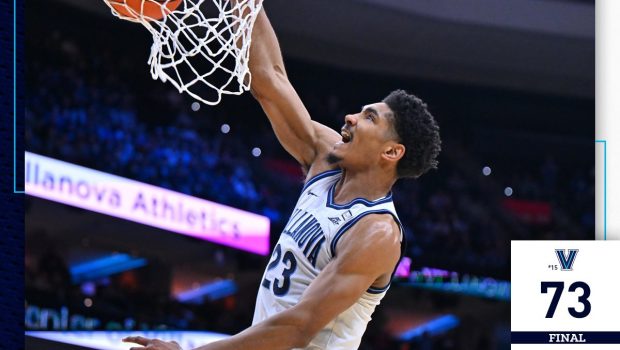 Villanova’s 2021-22 season has had a high-wire component unlike any in recent memory.

They fall behind early and have to rally to win, especially in the Big East.

Such as today at the Wells, when Justin Moore scored 14 of his 16 points in the second half and the No. 15 rallied from a seven-point deficit to beat Seton Hall 73-67.

Jermaine Samuels added 16 points while Brandon Slater had 10, including the go ahead layup with 1:26 left to play for the Wildcats (19-6, 12-3 Big East). Collin Gillespie and Eric Dixon each scored 10.

Kadary Richmond and Tray Jackson had 16 points apiece for Seton Hall (15-8, 6-7). Myles Cale added 11 and Alex Yetna had 15 rebonds for the Pirates in the see-saw game that was last tied at 67 before Slater’s basket.

Richmond had an open look for a three-pointer out of a timeout that rimmed out. Villanova would then keep the ball for the next 45 seconds after Gillespie grabbed an offensive rebound on a missed Caleb Daniels jumper and a Moore 3-pointer was knocked out of bounds by Seton Hall in a scramble.

Moore had suffered an ankle injury in Villanova’s loss at Marquette on Feb. 2, missing a Feb. 5th game against UConn. He returned with a 16-point effort on Tuesday night against St. John’s. For most of the game, Moore struggled, missing seven of his first eight shots before starting to get into the flow midway through the second half.

The second half developed into a series of runs. After a 9-0 run gave Villanova a 45-41 lead. Seton Hall followed by an 11-0 spurt for a 52-45 lead. The Wildcats answered that run with another 9-0 sprint over three minutes to regain the lead with 7:19 to play. After that point, the lead went back and forth with Richmond and Moore taking starring roles.