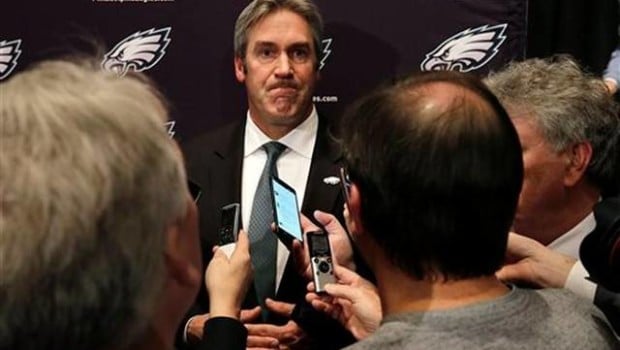 QUIET DOWN! WOULDN’T IT BE FUNNY IF EAGLES’ PEDERSON CAN REALLY COACH?

Many fans and the media have taken shots at the Eagles’ hiring of Doug Pederson as head coach.

NFL.com calling it the ‘worst hire” out of all the coaching vacancies the past couple of weeks. Eagles historian Ray Didinger this week called the hire “a leap of faith.”

But the fact of the matter is nobody knows how these new NFL coaches will work out until actual games have been played. Pederson played for Don Shula, Mike Holmgren and Andy Reid in his 10-year NFL playing career, mostly as a back-up QB.

So it is likely he absorbed some of what those successful coaches were teaching.

Pederson’s first hire was defensive coordinator Jim Schwartz, former head coach of the Detroit Lions, and there is speculation that Schwartz was a front office decision. Either way, he brings credibility and success that he enjoyed at other NFL outposts, including the Ravens, Titans, and Bills.

The Eagles’ defense has been ranked at the bottom of NFL statistics for the better part of 5 years. With Schwartz as new DC those stats are likely to change.

“I wanted somebody over there that could sort of take the edge off of me and say I can trust that side of the football,” Pederson said. “And I can kind of turn over the keys to that person. So Jim Schwartz was that guy for me. He’s been a head coach, he’s been a defensive coordinator for many years. He’s had success on that side of the ball. And so that was very important to me.”

That quote alone is a refreshing change from Chip Kelly’s confidence-bordering-on-arrogance.

Frank Reich was named offensive coordinator, and he also brings a wealth of NFL experience to the table that the Chip Kelly-led Eagles didn’t have.

Maybe, just maybe, a more NFL traditional way of dealing with 2016 NFL players will give the current Eagles much-needed breathing room to be able to go out on the field and perform, taking the place of Kelly’s frenetic style of play-calling that sunk the Eagles in more than one game.

Kelly seemed to be hell bent on reinventing the wheel when he got to the NFL, and we all know how that worked out.

With the Pederson, Schwartz, and Reich the Eagles now have three guys calling the shots with 55 collective years of NFL experience.

Now they have the opportunity to put it to the test when the 2016 season begins next September.