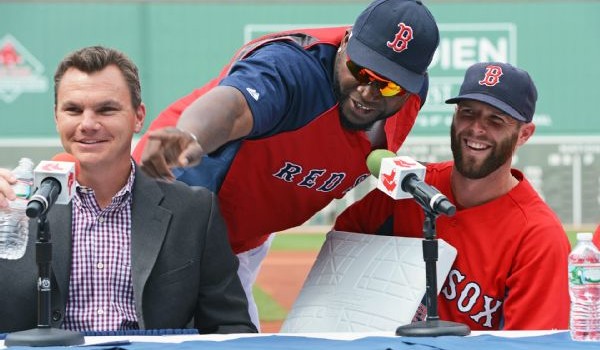 HEY PHILS FANS, HERE IS WHAT A REAL GM DID ON DEADLINE DAY

The Red Sox are 48-60, a marginally better record than the Phillies, and they blew up their World Series-winning team, shedding players and money, to build for the future

It was approximately 3:30 Thursday morning when Red Sox general manager Ben Cherington (photo above with David Ortiz and Dustin Pedroia) came to an agreement on a trade that would send ace lefthander Jon Lester and outfielder Jonny Gomes to the Oakland Athletics.

It was just the start of an unprecedented series of moves for the Red Sox, making for one of the most dizzying days in team history.

The Yankees, who had not made a trade with the Sox since 1997, dealt infielder Kelly Johnson for Drew, and the Baltimore Orioles received Miller in exchange for promising 21-year-old lefthander Eduardo Rodriguez.

The deal involving Drew came only 30 minutes before the 4 p.m. deadline for trades.

“I think everybody is stunned,” said Gomes as he drove away from Fenway Park in his red pickup truck.

The 48-60 Red Sox, hopelessly out of contention a year after winning it all, have fully turned their attention to next season with 54 games to play.

“We had to find a way to take advantage of the unfortunate position we were in and try to kick-start a little bit building the next team,” said Cherington, who said he didn’t sleep for two days plotting all the moves.

Of the 25 players who were on the playoff roster last season, only 14 are still with the organization. Seven have been traded, four of them on Thursday.

Cespedes and Craig are expected to be in the lineup for Friday night’s game against the Yankees, and Kelly will join the rotation next week.

Rookie Xander Bogaerts is being moved back to shortstop and Will Middlebrooks is returning from the minors to play third. Those moves were what motivated the trade of Drew.

A team that on Wednesday had a strong rotation and a weak offense now has a pitching staff loaded with unproven talent but a much-improved offensive attack.

Cespedes is the centerpiece. The 28-year-old from Cuba is an athletic and exciting player with a flair for dramatic plays. He has 17 home runs this season, three more than the Red Sox had out of their entire set of outfielders.

“A really powerful, dynamic player in his prime who fits in our ballpark in the outfield. We’ll probably take a look at him in right field and see sort of how he looks out there,” Cherington said.

Cespedes, who is signed through the 2015 season, was second in the American League Rookie of the Year voting in 2012 but has seen his batting average, on-base percentage, and slugging percentage drop since.

Still, his power potential made the deal work. Cespedes represented a better player than the Red Sox were likely to find in the free-agent market this winter.