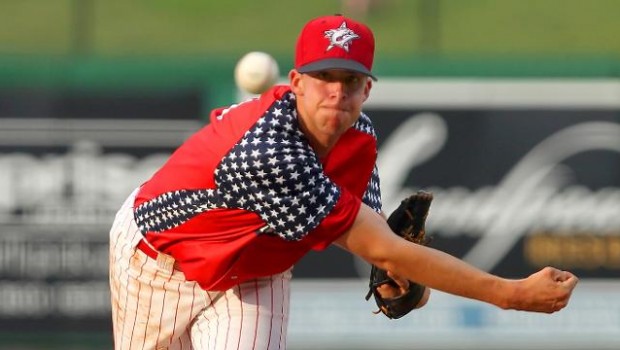 HEY PHILLIES FANS: THERE IS HOPE BURIED IN THEIR SUCKINESS!

Aaron Nola is the organization’s top pitching prospect, and fans have been clamoring for him since April. He should be promoted before the end of the month.

Okay everybody, let’s take a breath

The Phillies do suck, and they seem to be on the way to historic suckiness.

As we rest during the All-Star break, it’s time to take stock.

The Phillies are on pace for their first 100-loss season since 1961 (when they lost 23 games in a row!), thanks to an offense that lacks power, a rotation rarely lasts six innings and a farm system that is only now recovering after years of unlucky drafts.

But the action on the field has been almost overshadowed by the action off of it. Ryne Sandberg unexpectedly resigned on June 26, and just three days later, owner John Middleton introduced Andy MacPhail as the next team president.

The rebuilding might take longer than anticipated, but there are plenty of things to watch in the second half. The Phillies are hoping to see more good things from Maikel Franco, Cesar Hernandez, Freddy Galvis and the team’s other young players, a contingent which is expected to include top pitching prospect Aaron Nola. A solid finish from the kids will have the front office and fans feeling better about where the organization is headed.

1. Andy in charge
Everybody finally knows who will lead the organization going forward. MacPhail is highly regarded and has an impressive resume. He will use the next few months to evaluate all aspects of the club, including trades, the front office and the performance of general manager Ruben Amaro Jr.

2. The manager steps down
Sandberg must have seen the writing on the wall, because he cited the imminent arrival of a new team president as one reason he decided to walk away from the job he worked so hard to obtain. Pete Mackanin has handled himself well as Sandberg’s replacement.

3. Maikel movin’ upFranco got promoted from Triple-A Lehigh Valley on May 15, and so far, he has lived up to the hype. The Phillies had been desperate for a No. 3 hitter, and he has filled the role nicely.

5. Rotation problems Cliff Lee’s left elbow never healed, which hurt the rotation’s chances immediately. But other than Cole Hamels and Aaron Harang, the rotation has had more issues than anticipated.

1. Trade ’em all
Are the Phillies going to trade Hamels, Jonathan Papelbon, Ben Revere and others? They have every reason to trade them, but the club has been unable to make a deal. The bet here is that the Phils and contending teams will reach agreements about Hamels and Papelbon before the July 31 non-waiver Trade Deadline.

2. What about Chase and Ryan?
It will be more difficult to trade Chase Utley and Ryan Howard. Amaro already has said Hernandez will be the team’s No. 1 second baseman when Utley returns from the DL. How will Mackanin use Utley and Howard in the second half?

3. Welcome, Aaron
Nola is the organization’s top pitching prospect, and fans have been clamoring for him since April. He should be promoted before the end of the month. Scouts do not see Nola as more than a mid-rotation arm, but let’s be honest, the Phillies could use a good No. 3 right now.

4. Outfield, help!The Phillies’ outfield has been one of the least productive in baseball. They would love to see some pop from Cody Asche and Domonic Brown in the second half. Time is running short on Brown, who has not produced consistently since the first half of the 2013 season. The Phils love Asche, but they need to see more from him.

5. Is Kenny ready?
Assuming Papelbon gets his wish, Ken Giles will move into the closer’s role. Is he ready for the job? Can he handle the pressure? He has pitched well this season, but closing is a whole different animal.

FIRST-HALF AWARDSMVP: Franco. The rookie has lived up to expectations, giving the Phillies a No. 3 hitter.
Cy Young Award: Papelbon. It is likely that somebody else will be the team’s best arm in the second half, though.
Rookie: Franco. It will be interesting to see how pitchers adjust to him in the second half.
Top reliever: Papelbon. Giles is poised to step into the closer’s role when and if Papelbon is traded.

PLAYERS TO WATCH IN SECOND HALF

Nola: The top pitching prospect should be in the big leagues before the end of the month.
Utley: What will happen to the iconic second baseman once he returns from the DL?
Hamels: Every time he takes the hill, it could be his last start in a Phils uniform.