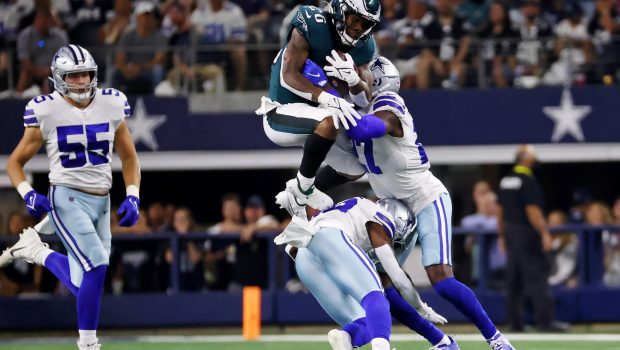 HEY NICK SIRIANNI: HOW ABOUT 20 SANDERS CARRIES INSTEAD OF 2!

The Eagles have an elite running back in Miles Sanders, the third-year pro from Penn State.

And yet he didn’t get his first carry in Monday night’s 41-21 loss at Dallas until the second quarter, but it seemed like he’d be getting more work once he broke that run for a 24-yard gain.

Sanders would only carry the ball once more all night.

And rook Kenny Gainwell only got called for one rrush.

Obviously, coach Nick Sirianni has to get his head out of his ass, pass less and run more this Sunday against the Chiefs.

“I do believe to have a successful offense, you have to run the ball.”

“I didn’t dwell on it too much. It is what it is. I can only control what I can control. The game was pretty much out of hand early. So I can see how the game plan didn’t go as planned. There was kind of a panic from the whole team based on how the game went.”

Eagles head coach Nick Sirianni said he was OK with the way things played out because many of the decisions not to hand the ball off were made off reads during plays, but added that “we’ve got to get our playmakers the ball” in reference to Sanders’ limited role in a lopsided loss. Sunday’s game against the Chiefs offers a chance to get Sanders more involved in the action.

Hey Nick, how about 20 carries for Boobie Miles Sanders this Sunday instead of 2!