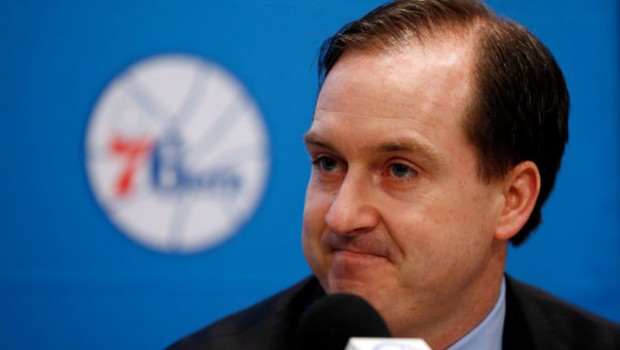 HEY, HINKIE HATERS: HE GETS PROPS FOR SIXERS’ RISE TO RESPECTABILITY

During his three seasons, the Sixers had a record of 47-197 and tied the NBA record for consecutive losses with 28. However, he also acquired more than one draft pick or pick swap per month over his first 26 months and secured the first overall selection in this year’s draft.

Over the past three seasons the Sixers, led by the recently resigned president and general manager Sam Hinkie, have been one of the most criticized franchises in professional sports.

The Sixers have been notoriously and historically bad.

You’ll get no debate from me on that score.

But three days before the Sixers take a huge step in their rehabilitation by taking either Ben Simmons or Brandon Ingram with the No. 1 pick in the NBA draft:

The city and Sixers fans owe Hinkie a big “thank you!” while most of the media (both locally and nationally) owe him an apology.

From the very beginning the deck was stacked against Hinkie. He inherited a mediocre, overachieving team rated 24th out of 30 in ESPN’s future power rankings — the remarkably lucky bunch had just managed to get to game 7 of the 2012 Eastern semifinals after beating a crippled Bulls team as Derrick Rose and Joakim Noah watched from the bench.

Hinkie arrived from Houston in the spring of 2013 and was immediately ridiculed by local beat writers, who wanted access to Hinkie’s every thought.

While his mute approach was criticized, it was as effective as it was controversial.

During his three seasons, the Sixers had a record of 47-197 and tied the NBA record for consecutive losses with 28. However, he also acquired more than one draft pick or pick swap per month over his first 26 months and secured the first overall selection in this year’s draft.

Currently the Sixers have one of, if not the best, foundations in the NBA made up of young players with all-star potential and draft picks. It is unfortunate that Hinkie, who was demoted last December and chose to resign a couple of months ago, won’t be here to see the fruits of his labor.

However, his influence on organization’s future will be rooted in more than the chance that Joel Embiid’s foot heals properly, whether Jahlil Okafor will become a better defender and if Simmons or Ingram became the next Lebron or Durant respectively.

Simply put, the lynchpin of Sam Hinkie’s rebuilding process has been predicated on the importance of having “the longest view in the room,” a notion that is completely lost on his critics. His measured approach sought to engender a culture of championship level basketball in the long run. His influence spread far beyond the accumulation of draft picks and was far more revolutionary to be dumbed down and classified as “tanking”.

Across the board Hinkie, sought to add elite level talent in the form of young, future stars and knowledgeable coaches, while improving the shortcomings of the franchise.

From the addition of coach Brett Brown — the longtime Spurs assistant coach and first player development coach who was instrumental to the success of players like Tim Duncan, Manu Ginobili, Tony Parker, and Kwahi Leonard — to masterminding the creation of the new practice facility which will be the best in the NBA, Hinkie’s contributions will be engrained in the future success of the Sixers.

From the beginning of Hinkie’s stay in Philly, he knew the path to greatness would probably frustrate many fans who either underestimated the enormousness of the task at hand or fundamentally disagreed with the process.

The conventional wisdom on Hinkie’s time as GM was centered primarily on the shortcomings of his regime rather than the merits and brilliant execution of his vision.

“The Process” called for two parts patience and one part courage, and while the journey was arduous the tides are turning and the future is bright.

Public perception does not change overnight, but a time will come when the fruits of Sam Hinkie’s labor will be harvested and I only hope that he will be remembered for planting the seeds.