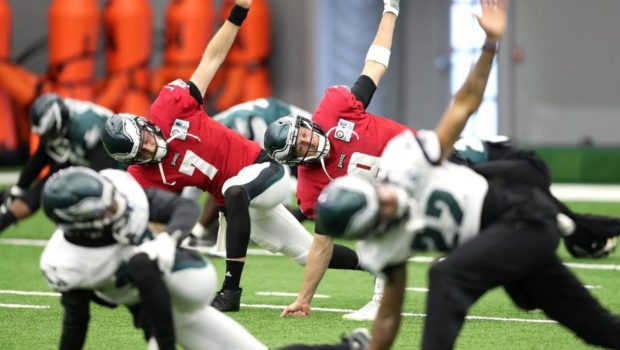 HEY, EAGLES NATION, GET OFF THE LEDGE! ONLY 8 DAYS TILL GAME-TIME!

Eagles fans are on pins and needles — and, truth be told — ledges of office buildings about the state of their faves.

Where once this season they seemed a lock for the Super Bowl, today they are not.

And adding to the trepidation is that the Birds won’t be playing this weekend, having earned a bye for the first round of the playoffs.

Which means there are still eight days to stew in the juices of paranoia until they play again on Jan. 13 at 4:35 at the Linc against either the Falcons, Panthers or Saints.

Their 13 wins are the most by the team in a single year other than in 2004, when Philly advanced to Super Bowl XXXIX. They unearthed a franchise quarterback in Carson Wentz, whose development suggests he’ll be in the MVP conversation a few more times. And they’ve done it all despite gut-punching injuries to everyone from future Hall of Fame left tackle Jason Peters to Wentz himself.

But even the Eagles’ 2-1 stretch to finish the regular season doesn’t have the city stoked for the playoffs.

OK, so maybe it’s wrong to suggest Eagles faithful aren’t excited about the team’s first playoff appearance in four years. But it’s not a stretch to suggest that the rest of the NFL’s playoff teams aren’t shaking in their boots at the thought of playing the Birds.

There was a 34-29 win over the New York Giants on Dec. 17. Wentz’s replacement, the familiar but much-maligned Nick Foles, did his best impression of No. 11 with four touchdowns, but Jim Schwartz’s defense had an uncharacteristically sloppy outing against Eli Manning and a team that had just fired its head coach and lost six of its last seven. There was a 19-10 win over the Oakland Raiders on Dec. 25, when the Eagles needed just about every second of an ugly Monday Night Football clash to edge another team that’s now searching for a head coach. And there was a 6-0 loss to the Dallas Cowboys on New Year’s Eve, when a mix of starters and backups couldn’t muster even a single point to carry into the postseason.

Now, does that actually mean anything? Probably not. This is a league where parity reigns supreme, where Wild Card candidates have won Super Bowls and where correlation between NFC playoff teams’ head-to-head matchups has been hard to find. In other words, if the “any given Sunday” moniker applies anywhere, it’s right in the Eagles’ playoff picture, which is guaranteed to kick off against one of three NFC South clubs on Saturday, Jan. 13.

There is, however, an emerging panic surrounding the Eagles’ chances, and for relatively good reason. No one who understood Wentz’s All-Pro-caliber impact anticipated the Eagles would be as lethal once he hit Injured Reserve after Week 14. But if the Birds are truly banking on their defense to do what it did against an overrated Dallas offense on Sunday and simultaneously get zero help from Foles and Co. on the other side of the ball, then the No. 1 seed is going to be phased out of the NFC bracket rather expeditiously.

Trusting that Schwartz’s unit will carry the team isn’t a bad bet. The Eagles’ turnover numbers are up there, the front seven is still the league’s best against the run and, most importantly, just about every Opening Day starter outside of linebacker Jordan Hicks should be rested and fully healthy come Divisional Round weekend. But trusting that the defense will be as dominant throughout the postseason and shoulder the burden of an inept offense is probably asking too much. Unless the Eagles are constantly in the face ofCam Newton, Drew Brees, Matt Ryan or whomever shows up at Lincoln Financial Field, there’s just not as much hope for a team that, earlier this year, proved capable of going blow for blow with — or just outright blowing out — the best of them.

Where does that leave the Eagles and a fan base that may have been teased to the highest degree thanks to the team’s early-season run? Well, for one, we know that the concerns of Philly’s last three games have tempered expectations. Maybe they haven’t dampened the spirits of all Eagles fans, but does anyone really think the rest of the NFL views Pederson’s team the same way it did in November? At the same time, the final verdict on this whole season still rests in the hands of the Eagles themselves. Their face value has slipped considerably, but it’s still up to them to show us whether they are, in fact, the No. 1 team in their conference.

Maybe the Eagles truly will look like a different team come playoff time. (Remembering that Jay Ajayi is on the roster would be a good start.) Their bar has been raised and lowered all in one season — raised upon Wentz’s meteoric surge and lowered upon his tragic departure. And now, with the bar as low as it could be for a 13-win team entering the playoffs with home-field advantage, time will tell if Philadelphia really can raise it again.