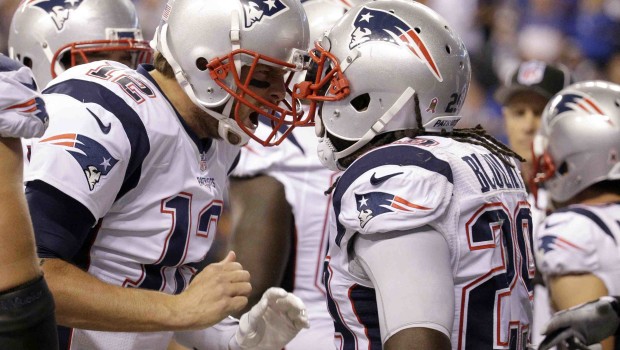 Hey Eagles Nation, your boys are trying to win now!

Not five years from now.

If you had doubts, they ended with today’s signing of LeGarrette Blount (above right with Tom Brady) to a deal worth a max of $2.8 million.

Coming off an 18-touchdown season, the 30-year-old veteran immediately enters as the goal-line, short-yardage back Philly has missed the past few seasons.

The Arizona Cardinals and New York Giants both had contract offers out to Blount before the Eagles stepped up to secure the running back.

Blount’s joins a Philly backfield that boasts all-time great scat back Darren Sproles, Wendell Smallwood and fourth-round rookie Donnel Pumphrey along with the injured Ryan Mathews. Blount ran for 1,161 yards on 299 carries last season and can carry a load if needed while the smaller backs handle the pass-catching duties.

Last week, the New England Patriots saddled Blount with a little-used tender. The move allowed thePatriots to keep the running back’s departure as part of their compensation formula, despite the signing happening after May 9. Thus, Blount’s deal will work against Philly’s comp-pick formula.

As part of the Pats’ tender, Blount was set to earn a base salary of $1.1 million, with a max value of $2.1 million if he stayed in New England. Eagles GM Howie Roseman sweated that deal to get Blount to Philly as its big back.

Adding Blount continues Roseman’s offseason makeover of infusing veteran players to the roster on short-term deals. This offseason, the Eagles added receiver Alshon Jeffery on a one-year deal,Torrey Smith to a cuttable contract, and traded for defensive lineman Timmy Jernigan (on the final year of his contract).

The mixture of veterans on reasonable deals puts the Eagles in position to leap back into the playoff hunt.

Philly’s offense, in particular, has been significantly upgraded to buffer Carson Wentz in Year 2. The signings of Jeffery and Smith to go with Jordan Matthews, Zack Ertz, Brent Celek and Nelson Agholor(if he makes the team) gives Wentz a much-improved pass-catching corps. Blount’s addition to Sproles, Smallwood and Pumphrey does wonders to round out the backfield.

Roseman certainly put pieces in place to help Wentz progress as a passer. If the sophomore improves his footwork, mechanics, and mental acumen, he’s set up to thrive.