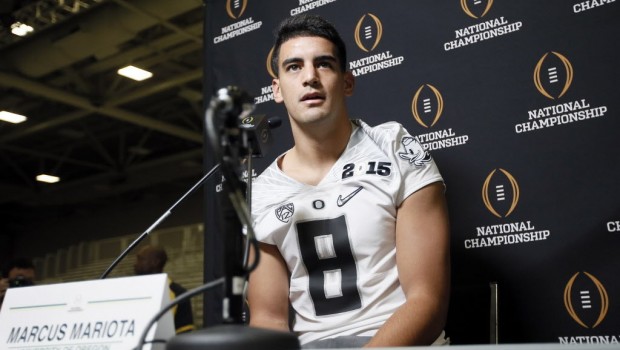 HEY, EAGLES FANS — MARCUS THE MAGNIFICENT MAY STAY IN SCHOOL

The sound you are hearing today is the sound of silence from the media pack and the other Philly sports fans who were urging the Eagles to move from No. 20 to No. 1 in the 2015 draft in order to take Oregon’s Marcus Mariota.

Trouble is, in the wake of the Ducks’ 42-20 loss to Ohio State for the national championship, Marcus the Magnificent still hasn’t declared that he will leave school early and become eligible for the May NFL draft.

Minutes after last night’s game, the first questions posed to Mariota were whether or not he had made his decision.

“I have not [made a decision],” Mariota said. “I’ll take the next couple of days with my family to make that decision.”

“Obviously, it hurts. But, there’s a lot of things that play into my decision.”

As multiple questions were thrown his way about his draft status, though, Mariota did not rule out the possibility of returning for another season at Oregon.

Mariota ignited the Oregon Ducks fanbase at the end of last season when he announced that he would be returning for another season.

In route to becoming the first ever Heisman Trophy winner in school history, Marita completed 280 of his 408 pass attempts for 4121 yards and 40 touchdowns against four interceptions. He rushed for another 731 yards and 15 TDs.

As a Duck, Mariota tallied 103 TDs and 10,463 yards passing along with 2198 yards rushing and 29 TDs. Mariota also became the first player in PAC-12 history to record 5,000 yards of total offense in one season. If the loss to the Buckeyes was indeed the final game of his collegiate career, he would finish 35-5 as a starter.