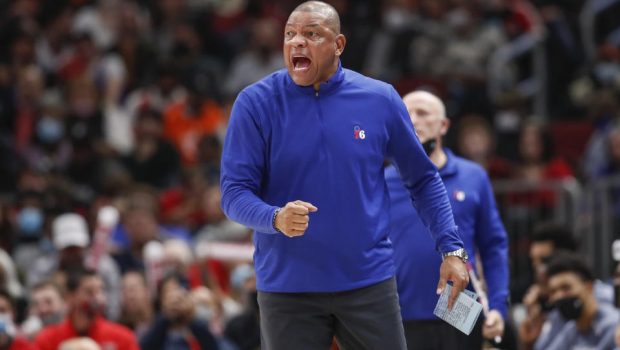 HEY DOC, WHY WAS IT SO HARD FOR SIXERS TO BEAT RAPS? NO OTHER PHILLY COACH WOULD BE ASKED SUCH A DUMB-ASS QUESTION!

In no other city in this country would the Inky’s Keith Pompey’s question to Sixers coach Doc Rivers have been asked.

In fact, no other Philly coach would have been questioned about why they hadn’t beaten a team more easily than the Sixers beat the Raps the other night.

And all the buzz yesterday on the Net and the air waves was that Pompey had asked a legitimate question.

It was a “dumb-ass question,” Rivers shot back.

Close your eyes and imagine a legitimate member of the media asking the Phils Joe Girardi, the Eagles Nick Sirianni, the Flyers Mike Yao or Villanova’s Jay Wright why they hadn’t won more convincingly.

First of all, the lapdogs who cover the Flyers are fan boys first, just happy to get in for free. Never is a discouraging word uttered.

The Eagles, Phillies and Villanova are covered by pros who ask legitimate questions.

The Sixers are held to a higher standard, perhaps because “Trust the Process” has become a national punch line.

The Flyers lost 10 games in a row last month and when they finally won Yao was not asked:

“Shouldn’t you have won by more?”

The basic premise of the question was that the Raps were decimated by COVID, and the fact that the Sixers had to scrape to win was indicative of something deeper.

But after the Sixers barely beat the Raptors, Pompey asked Rivers if he was concerned by the trend of close games against undermanned teams.

“No,” he said. “Like, I think it’s funny. When we were undermanned and we won a couple of games, and we had close games and we lost, I didn’t hear that in reverse. Like, this is the NBA. Think about that stretch when we had all those guys and we lost four and five games by one point, three points.

“Were their coaches worried that they won one point or three points? These guys played hard. This is the NBA. Every single guy in this league can play. So I don’t sit back and judge like we didn’t win by 10 or 12 tonight. … They’re not sitting back, thinking, ‘Man, we should have won by 20.’”

Yes, the Raps were very thin.

But the Sixers have played the entire season without Ben Simmons, their crybaby who is sitting instead of making $29 million in order to force a trade.

Not to mention that Joel Embiid and Tobias Harris are just now escaping the COVID cloud that benched them for nine games each last month. Or that Philly was playing without Andre Drummond and Danny Green who were on the COVID list.

I am sorry, but Keith Pompey, who is basically a typist and not a writer, does not define the Sixers.

Let’s see how Daryl Morey does in trading Simmons and getting a real point guard or power forward.

Instead of playing the first 34 games of the season with a massive hole in the team’s side.

Then, it would be fair to ask the question of Doc Rivers: 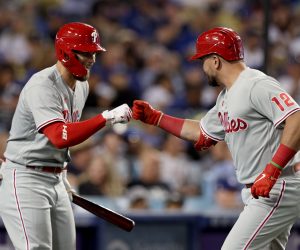