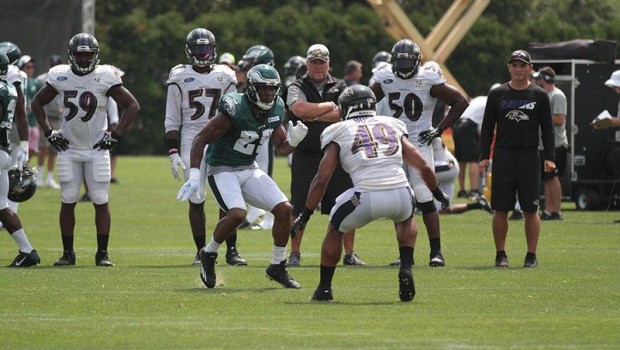 HEY CHIPPER, LET OUR MAN AND YOURS DEMARCO MURRAY PLAY!

It has beaten to death in the lame-ass local media that:

Eagles running back DeMarco Murray hasn’t been practicing much during training camp.

It’s not that Murray hasn’t been practicing that stems the uneasiness; it’s the lack of carries.

During Wednesday’s joint practice with the Ravens, Murray (above) started off taking reps with the first team and then joined 7-on-7s with the Ravens’ defense, both of which Murray seemed to do well with.

However, as practice went on, the touches for Murray began to decrease. It wasn’t anything new, but the question still remains if Murray will be ready for the regular season.

Coach Chip Kelly has acknowledged Murray’s touches last season, and the fear of overworking the reigning NFL Offensive Player of the Year could be why he’s been limited in practice.

Murray set an NFL record in 2014 by starting the season with eight consecutive 100-yard rushing performances. He became just the seventh player since 1960 to record at least 12 games of 100-plus rushing yards in a single season.

Last season, he was tied for the league lead with 13 rushing touchdowns and added 57 catches for 416 yards out of the backfield.

After coming off a record-setting season, there’s no doubt he wants to get back on the field and continue where he left off.

Still, Murray respects Kelly’s decision and patiently awaits for his workload to increase.

“It feels like certain days he’s not giving me as much work,” Murray said. “Obviously, you want to come out here and compete every day and work as hard as you can to try to help the team but, like I said, they know what’s best for the team.”

If the season started tomorrow, Murray said, without hesitation, he’d be ready.