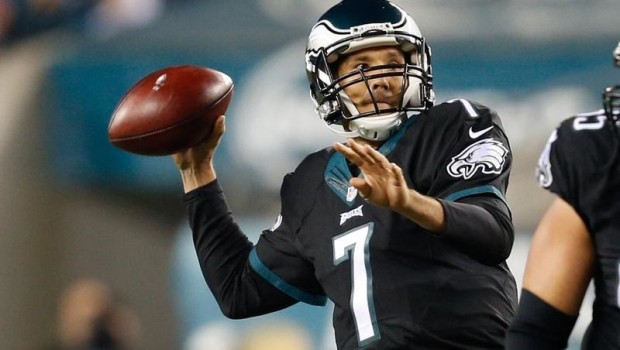 HEY CHIPPER: IF EAGLE SAM IS THE ANSWER, WTF IS THE QUESTION?

So, Chip Kelly, what did you think of your Eagles 27-7 victory over the New York Giants on a night that the woeful New York secondary did a fine job on the suddenly sucky Sam Bradford?

Yes, the Eagles are now 3-3 and in first place if the dumpster fore that is the NFC East.

But is Bradford proving he’s the long-term answer at quarterback?

Or as Kelly was asked Monday night, how far has he gone on the developmental continuum?

“I don’t have an answer, a continuum answer,” Kelly said. “I just know he needs to improve. We all need to improve on the offensive side of the ball.”

It was a win, despite the Eagles not playing their best offensive game. That’s a fair and important point.

Kelly can accentuate that the defense shut out Eli Manning and New York after allowing a game-opening 80-yard drive for a 7-0 Giants lead. And the offense, well, DeMarco Murray had his best game yet … 22 carries for 109 yards and a touchdown. That’s two sizable additions to the plus-side of the ledger.

As Kelly said himself:

“We’re starting to run the ball better as a group. We hit them with some good play-action passes that really got some good chunk plays for us. Obviously the first touchdown to [Riley Cooper]. We hit Miles [Austin] on a nice seam route.”

And again … the win.

“Every single game we play is important,” Kelly said. “At the end of the year, what’s your final record? … I don’t go in and say, hey, it’s an AFC opponent, let’s just take it easy this week because it doesn’t count. They all count.”

The most fundamental building block of this Chip Kelly-controlled regime – and most NFL regimes, for that matter – is the quarterback.

And through six games, it’s a very shaky argument that the Eagles have found their man. Indeed, looking at the eight games of Nick Foles last season (81.4 passer rating, 13 touchdowns, 10 interceptions, 2,163 passing yards and a 59.8 completion percentage), Bradford has some work to do just to ensure his first eight-game sample isn’t a wash when compared to 2014 Foles.