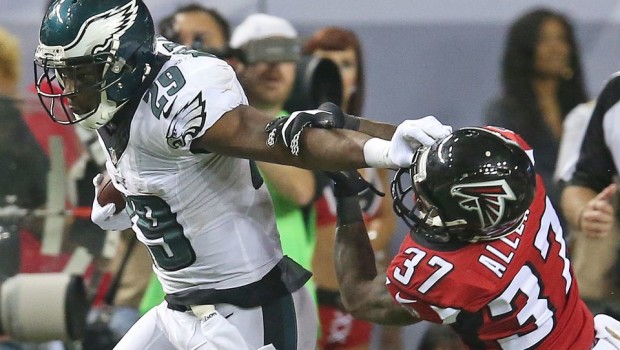 HEY CHIP: WHY WASN’T MURRAY ON THE FIELD IN EAGLES’ MONEY TIME?

For many Eagles fans, it was bizarre to contemplate DeMarco Murray on the sidelines when last night’s Eagles’ game was in the balance and the Birds were driving for a game-winning score.

But there he was, with Ryan Mathews on the field pounding away at the Falcons defense.

In March, Eagles Supreme Leader Chip Kelly gave DeMarco Murray a five-year contract worth up to $42 million to leave the Dallas Cowboys for the Eagles.

On Monday night, Murray got the rock just eight times – and not on a critical third-and-1 late in the fourth quarter.

Instead Mathews wound up stuffed at the line. In part because the play showed so little promise, Kelly decide to kick on fourth-and-1 and take the lead.

Cody Parkey, though, promptly missed the ensuing 44-yarder and a furious Eagles comeback from to a fruitless first half fell short. Atlanta won the opener 26-24.

Kelly may have lured Murray to Philly but he isn’t running Dallas’ offense, which perhaps means an entirely new role for the league’s 2014 rushing champ.

Murray gained 1,845 yards on a whopping 392 carries a year ago, averaging 115.3 yards on 24.5 attempts per game. This was entirely different, just eight carries for nine yards, plus four catches for 11 more.

There were two touchdowns on Monday, an 8-yard run and a 5-yard reception that show Murray’s unique value. But he last touched the ball with 10:49 remaining in the fourth.

“Whoever is in the game [gets the call],” Kelly said, and that meant Mathews, a sixth-year vet out of Fresno State.

Kelly is running a speed system that doesn’t have time for such substitutions – or more important, allowing the defense to run fresh guys in. Sometimes that means the high-priced free agent has to watch. On Monday he watched a lot.

“Obviously you want to get more opportunities,” Murray said. “Not only myself, everyone wants to get the ball as many times as they can to help this team.”

As with everything in the NFL, this game needs to be viewed through the prism of it being the season-opener. “It’s Week 1,” quarterback Sam Bradford said. “There are 15 more to go.”

The Birds didn’t drop to 0-1 Monday because Murray didn’t get the ball late in the game. It wasn’t even that Parkey blew that final field goal or the Falcons dominated the push on the line or that the Eagles committed 10 penalties.

It was all of those things, although it was mostly lost in the first half, when Philly couldn’t move the ball, seven of its eight drives yielded just 56 yards, and Atlanta led 20-3. The Falcons putting an extra man in the defensive box seemed to be a challenge to overcome.

“We were horrible,” Kelly put it, bluntly and honestly.

Kelly is such an oversized personality unafraid of making bold personnel and strategy moves that every Eagles game quickly becomes a referendum on whether or not he knows what he is doing. When the offense stalled, he had traded away too many of his playmakers. When linebacker Kiko Alonso made a brilliant one-handed, touchdown-saving interception of Atlanta’s Matt Ryan, he was smart for trading one of those playmakers, LeSean McCoy for such a big-play defender.

When the second half came and a worn down Atlanta defense struggled to keep pace as Philly reeled off touchdown drives of 95 and 80 yards – and then 54 before missing that kick – Kelly was again some kind of genius.

“We started playing our game and having fun,” Mathews said. “The pressure was off.”

The reality is this was a game that was there for the Eagles to win. Atlanta doesn’t appear to be a particularly great team and Matt Ryan handed over a couple of interceptions.

“It just felt like we were playing behind the sticks all day,” said Bradford, the other big offseason acquisition who went 36 of 52 for 336 yards, one touchdown and two picks. “It seemed like we [couldn’t] get anything going on first down [in the first half].”

Kelly vowed to watch tape and fix it. Dallas arrives on Sunday, so it’s a short week against a heated rival, and Murray will be in the spotlight.

If the first game is any indication, his role with the Eagles is an entirely new one. There isn’t that massive offensive line to just keep blasting through, time after time. He looks to be part of a group, one that has to continue to spotlight the ankle-breaking speed of Darren Sproles (126 total yards from scrimmage).

“[Kelly] is a great offensive coordinator and a great coach,” Murray said. “Whatever he decides to do, we are all for it.”