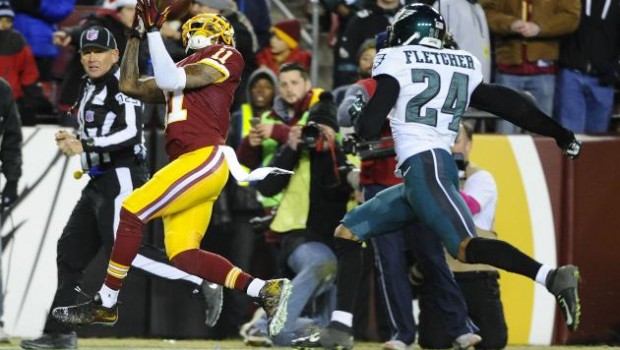 The irony was too delicious to miss.

The Eagles stunk out the joint in losing the the Redskins 27-24 yesterday, and the deciding factor was DeSean Jackson, the superb wide receiver the Eagles cuts last March for no apparent reason.

And now the Birds are hanging by a postseason thread.

The Eagles have only themselves to blame for Saturday’s mistake-filled loss that has them in precarious position for the postseason.

Chip Kelly’s Eagles were flagged for 13 penalties, missed two field goals and a pair of back-breaking turnovers against the 4-11 Washington Redskins.

“Yeah, you’re not gonna win a football game that way,” Kelly said after the game.

In addition to the mental errors, Philly was haunted by former Eagles wide receiver Jackson, who beat Bradley Fletcher for a pair of big plays.

“You try to get some help over the top … in certain coverages and get matched up with him,” Kelly explained. “But I thought our corners could stay with him. Obviously they didn’t, and he had a good game.”

Jackson has racked up nine catches for 243 yards (27.0 yards per reception) and a touchdown in two games against the team that unceremoniously dumped him.

To the surprise of no one, he had some choice words for the Eagles and their questionable strategy of leaving Fletcher on an island against the game’s most dangerous deep threat.

“I have been there the past couple years, that’s how they play,” Jackson said. “They’re very naive and they play how they play. … They have witnessed a lot players, wide receivers and tight ends, get off for some huge games on them. I’m just happy to be on this side and be able to send them home with a loss.”

Jackson also said that he still has a good relationship with many former teammates, who are “constantly” telling him how much they miss him.

That’s not hard to believe. His 12 catches for 40 or more yards not only lead the league, but also match the total for the entire Eagles team.

Asked if he regretted releasing his best playmaker from 2013, Kelly replied, “No. I’m thinking about the football game.”

If the Cowboys bounce the Eagles from the playoff race with a win on Sunday, Kelly will have plenty of time to think about Saturday’s fiasco.

The latest Around The NFL Podcast previews every Week 16 ga