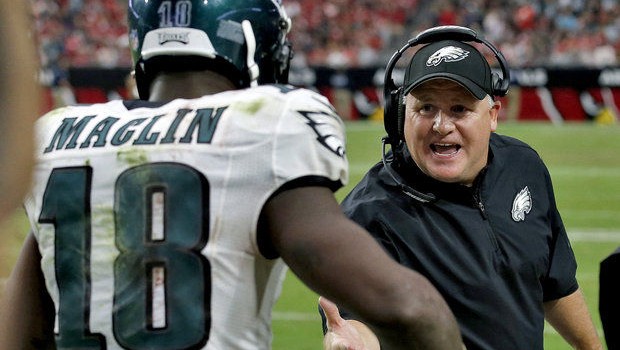 I hope Eagles Supreme Leader Chip Kelly hurries up and settles on a new general manager to replace Howie Boy.

GM is an important position, but not nearly as important as wide receiver, and Kelly needs to get cracking on retaining the services of one Jeremy Maclin.

“Their group is OK overall,” a personnel man told NJ.com about the Eagles receivers. “It’s an average group. They’re basically pretty young, so they can still get better. (Jordan) Matthews probably will. I don’t know enough about Huff right now.”

Maclin, who came back from a torn ACL suffered in training camp of 2013, thrived in Chip Kelly’s offense.

In what turned out to be a career year for the former first-round draft pick, Maclin caught 85 passes for 1,318 yards and 10 touchdowns. He also had a team-high 21 catches of over 20 yards.

“Good player,” the personnel man said. “He’s not in that elite, elite category, because there are just so many really good receivers today. But he’s good, and he’s good for (the Eagles). I would think they keep him.”

Maclin made it clear near the end of the season that he wants to remain with the Eagles. Asked if he wouldn’t want to at least test the free agent market, he again stated his intention to stay with the only team he knows.

Before he accepted a one-year, prove-it deal last year, coming off the knee injury, the Eagles did make him a five-year offer.

If they offer another five-year deal this time it should total close to $40 million for him to accept.

Cooper, despite the coaching staff’s praise of his blocking skills, did not have a very good season. He caught 55 passes — he was targeted 95 times — for 577 yards and three touchdowns. Only five of his 55 catches went for 20 yards, or more.

“There wasn’t a lot of big plays there,” the personnel man said. “He made plays the year before, but not this year. You might think he missed (Nick) Foles, but he wasn’t doing anything when he was in there, either.”

Cooper isn’t going anywhere, after singing a five-year, $22 million deal last offseason, it would cost the Eagles more to cut him than keep him.

Matthews, the 2014 second-round pick out of Vanderbilt, played well as a rookie. Playing almost exclusively out of the slot, he caught 67 passes for 872 yards and eight touchdowns. He had 16 catches of 20 yards, or more.

“Not bad at all,” the executive said. “He drops a few, but overall a good rookie year. I’d like to see him move outside and see what he can do there.”

That could happen, especially if Huff, a 2014 third-round pick, makes strides in camp next summer.

Huff caught just eight passes for 98 yards as a rookie.

The coaching staff puts a lot of that on him missing time in preseason with a shoulder injury. The Giants’ Odell Beckham missed even more time with a hamstring injury. How did that affect him?

“Very raw,” the personnel man said of Huff. “There’s some things to like, but he needs to grow. This is a big offseason for him.”

Jeff Maehl, who caught all three passes thrown his way, and Brad Smith, who caught just one, are the fifth and sixth receivers who are on the roster primarily for their special teams prowess.