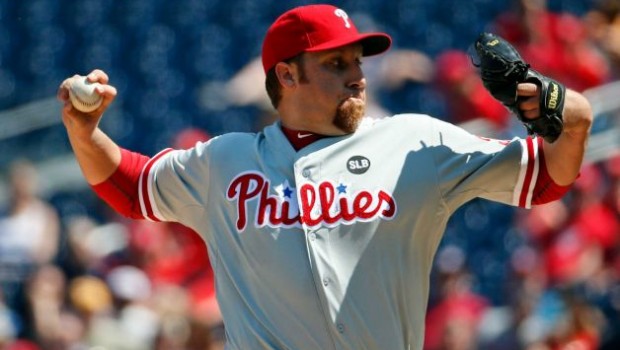 Odubel Herrera and Aaron Harang have become big-time performers for the Phillies.

Herrera had three hits and scored twice, Harang (photo above) pitched six innings and the Phillies snapped a six-game losing streak with a 5-3 win over the Washington Nationals on Saturday.

Freddy Galvis had two RBI singles for the Phils, who had scored 13 runs over its last six games.

Bryce Harper hit a long home run for Washington, which had won three straight. Ian Desmond added three hits, but the shortstop continued to struggle in the field, committing two errors that contributed to a pair of runs.

Harang (2-1) gave up three runs and seven hits. He struck out six and walked two.

Jonathan Papelbon pitched the ninth for his third save.

Jordan Zimmermann (1-2) allowed two earned and four hits over 6 1-3 innings. He improved on Monday’s outing at Boston in which he gave up eight runs in 2 1-3 innings.

The Phillies broke a 3-all tie in the seventh when Ryan Howard walked, pinch runner Ben Revere stole second and went to third on a flyout.

With the infield in, pinch hitter Grady Sizemore hit a bouncer to first and Revere beat Ryan Zimmerman’s throw to the plate.

Harper tied it at 3 with his fourth homer of the year, a towering shot that hit the top of the green wall well beyond the center field fence in the fifth.

Desmond’s latest defensive troubles enabled the Phillies to take a 2-1 lead in the third. He bobbled Harang’s one-out bouncer, and when Harang was ruled safe after a review, Desmond had his eighth error in 12 games.

After Herrera’s double, Galvis’ single scored Harang and sent Herrera to third. Chase Utley then hit a potential inning-ending, double-play grounder to Dan Uggla, but Desmond, attempting to transfer the ball to his throwing hand, dropped it. Utley was safe at first and Herrera scored.