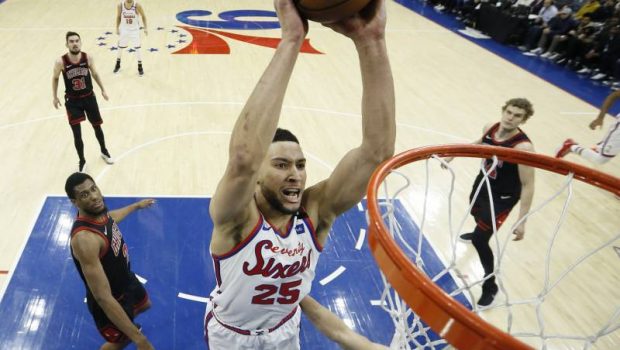 HERE’S WHY WE LOVE SIXERS BENNY SIMMONS, IN CASE YOU FORGOT!

Ben Simmons made the 2019-2020 All-NBA Third Team, just the latest in a string of honors over his first three seasons as a pro.

Showing All-Star skills on both sides of the court all season, Simmons proved his impressive ability to guard any player on the floor, earning him a place on the 2019-2020 All-Defensive First Team last week.

Simmons, the youngest member of the All-Defensive First team, led the league in steals (2.1 spg) this season. He finished second in total steals (119), topped only by James Harden (125), who played in 11 more games than Simmons.

Since Simmons’ first NBA season in 2017-18, he boasts a Rookie of the Year Award, two All-Star appearances, an All-Defense team selection, and now, an All-NBA honor.

Simmons averaged 16.4 points, 7.8 rebounds, and 8.0 assists, and was one of just three players to finish the regular season with those averages, along with Luka Doncic and LeBron James.

Simmons was the only player in the league to average at least 16 points, seven rebounds, eight assists, and two steals per game this season.

The Melbourne, Australia native’s 8.0 assists ranked sixth-best in the league.

The third-year pro also shot a career-high 58.0% from the field.

Simmons was phenomenal in the team’s win over Brooklyn on Jan. 20, finishing with a career-high 34 points, along with 12 rebounds and 12 assists for a massive triple-double. He also added five steals.