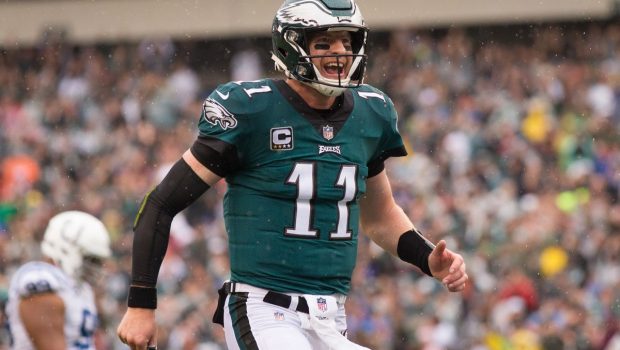 HERE’S WHY VEGAS IS MOVING EAGLES UP THE 2019 SUPE POLE!

Quarterback Carson Wentz (above) returned from injury and powered the Eagles to a 20-16 victory over the Indianapolis Colts on Sunday, reports the Washington Post.

That pushed the team’s record to 2-1 and improved their Super Bowl odds from 16-to-1 to 14-to-1 per the Westgate SuperBook in Las Vegas, which implies a six percent chance at repeating as NFL champions.

However, based on what we have seen from them so far, their chances of winning back-to-back Super Bowls is closer to eight percent, or 11-to-1 odds. Only the Los Angeles Rams, Kansas City Chiefs and Jacksonville Jaguars are more likely to be the last team standing at the end of the playoffs.

The upside for the Eagles is huge. Wentz’s first performance back — 25 for 37, 255 yards and a touchdown plus an interception — earned him a 39.3 QBR rating from ESPN, meaning the performance would be good enough for the team to go 6-10 over a full season. But Wentz led the league in QBR last season (78.5) before his injury in Week 14, indicating there are likely better performances ahead.